You are here:Home » Euromil News » PESCO: Relaunching the SAFE Concept 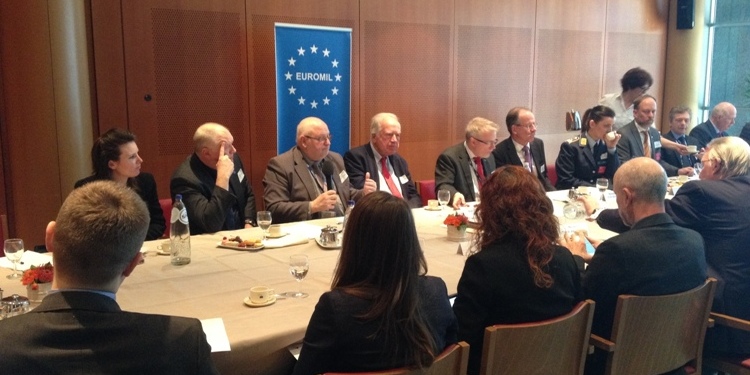 On 20 March 2018, the Kangaroo Group organised, in cooperation with the European Organisation of Military Associations (EUROMIL), a lunchtime debate entitled “PESCO: Relaunching the SAFE Concept” at the European Parliament in Brussels.

The event addressed the launch of the Permanent Structured Cooperation (PESCO) and the opportunity to revive the SAFE concept, adopted in a European Parliament Resolution on the “European Security Strategy and ESDP” on 19 February 2009 and standing for “Synchronised Armed Forces Europe”. The discussion, which was moderated by Michael Gahler, MEP and President of the Kangaroo Group, introduced by Karl von Wogau, former MEP and Secretary General of the Kangaroo Group, and concluded by Emmanuel Jacob, President of EUROMIL, particularly focused on medical care. Speakers included Bernd-Ulrich von Wegerer, Permanent Representation of Germany to the EU and Martina Hojka, Lt.Col., Medical Advisor/Action Officer, EUMS/EEAS.

The SAFE concept was initiated by Hans-Gert Pöttering, former President of the European Parliament, and taken over by Karl von Wogau in a report adopted as a resolution by the plenary almost ten years ago. Although the concept has not been much used since then, it involved the increase of cooperation among national armed forces so that they would become synchronised including for what concerns training standards and medical care – two issues covered by the first list of 17 collaborative projects adopted by the Council of the EU in the framework of PESCO, a permanent framework for defence cooperation.

Participants discussed the important progresses made towards a common European defence policy in the last two years, particularly with the adoption of PESCO and the European Defence Fund. Among the list of current PESCO projects figures an EU Medical Command (EMC) under German lead. Medical care is a key question in the SAFE concept. PESCO should help reaching the goals of the SAFE concept and the EMC project should participate in synchronizing armed forces.

It was mentioned that the EMC should be a medical military agency and a coordination centre, working in synergy with the Multinational Medical Coordination Centre (MMCC), a similar project launched at NATO also under German lead. The aim is to bundle European capabilities and expertise as well as to increase EU-NATO cooperation in the benefit of both organisations. The two projects should be complementary, focusing on capability building and operational readiness to fill in the gaps in joint operations for both military and civilian personnel. The EMC, likewise other PESCO projects, should benefit from EU funding. High mobility and flexibility should be keywords for successful treatment results.

Remaining obstacles should nevertheless still be tackled such as legal issues and liability questions. Further common thinking and actions is thus highly needed from European decision-makers.

At the end of the discussion, the President of EUROMIL concluded that the SAFE concept should be relaunched as all participants agreed with the principles of sharing and using financial resources in a more efficient and coordinated way, as well as having synchronised and interoperable armed forces, allowing their personnel to work more and better together in the best possible conditions. It was nonetheless acknowledged that more should be done to not only harmonise capabilities but also synchronise working conditions for military personnel.

For instance, the idea was brought up that in multinational and more particularly CSDP missions, military personnel should all have equal wages, insurances and medical treatments, funded by the EU budget, to increase solidarity and motivation.

EUROMIL will thus continue to monitor the development of PESCO, including the new and future projects conducted under its umbrella, and will further advocate for the human and social factor to be included in this framework.