You are here:Home » Euromil News » Military Trade Unionism in Europe 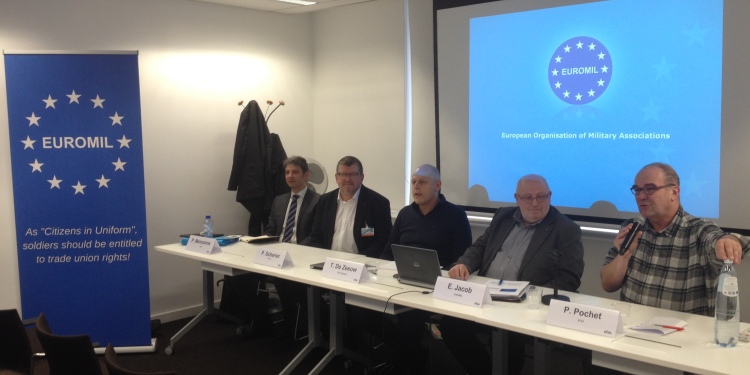 EUROMIL, together with the European Trade Union Institute (ETUI) organised a lunch debate on “Military Trade Unionism in Europe” on 21 March 2018.

Peter Scherrer, European Trade Union Confederation (ETUC) Deputy General Secretary, opened the debate by stating that the right of workers to have their voices heard, the right to form and join trade unions is a fundamental right. One important group of workers however is often forgotten and still today in many countries struggles to have its rights respected: the military personnel.

Philippe Pochet, ETUI Director, introduced the debate and gave the floor to Emmanuel Jacob, EUROMIL President, who outlined the overall situation of military personnel in Europe. Mr. Jacob started by thanking the ETUC and ETUI for the cooperation on the event and mentioned that while EUROMIL is not a member of ETUC, it still entertains good relations with the confederation. At the outset of his presentation, the President asked whether trade unionism and military really fit together, but immediately answered this rather rhetorical question by explaining the concept of “Citizen in Uniform”. As such, military personnel should be granted the same rights and obligations as any other citizen. The current situation in Europe is however quite diverse. In some countries, military personnel have the right of association, in some it has trade union rights and in other countries nothing is organised, or the legal situation is very unclear. International rules and treaties are quite clear and stipulate that the right of association cannot be denied to a whole group of workers, it can however be adapted to the specific nature of the job. This would mean that military personnel do for example not have the right to strike but should be entitled to participate in a social dialogue to negotiate working conditions, salaries and pensions. The President cited several court cases in recent years, amongst them the most recent complaint EUROMIL launched before the European Committee on Social Rights against Ireland. The President concluded by emphasizing that EUROMIL strongly believes that military trade unionism does not harm military efficiency. On the contrary, being represented in trade unions and professional associations can enhance the moral and loyalty of the troops.

Mr. Pierluciano Mennonna, National Secretary of the SILP (Italian State Police Workers Union), explained how the situation for security sector personnel is like in Italy. The police force is split into different corps: the police and the prison officers do have a civil status and therefore have the right to form and join trade unions, while the military police has military status and is therefore forbidden to join unions. Also the personnel employed by the military force (army, navy and air force) does not have trade union rights in Italy. In the current system of representation, basic committees are formed in the offices, these elect interim committees which elect a central committee. Members of the central committee can discuss issues such as housing of military personnel but do this at a great personal risk: As there is no trade union status, these persons are not protected and risk to be moved to another job. As the corps also pays their salaries, the committee members do not enjoy the necessary independence to really be the voice of the military personnel. Because of this situation, a lot of soldiers who are dissatisfied with their working conditions do not attempt to tackle problems via the committees but turn to courts instead where they file complaints. One of these cases of extreme importance for Italian military personnel will be discussed at the Constitutional Court on 10 April 2018: The question whether or not it is legal to deny Italian military personnel trade union rights will be decided. Mr. Mennonna expressed his hope that the military personnel in Italy will one day be granted the same rights as their European colleagues.

Mr. Ton de Zeeuw, FNV Veiligheid, the Netherlands, EUROMIL Treasurer, took the floor and explained how military trade unionism works in the Netherlands. He started by pointing out that in the Netherlands, 80% of military personnel is organised in trade unions. Compared to only 10-15% of civilian workers organised in trade unions in the Netherlands, this figure is astonishingly high. Mr. de Zeeuw offered three possible reasons for this phenomenon: First of all, military trade unionism has a long tradition. Already with the emerging socialism in the late 19th century, Dutch soldiers started to organise themselves and care for one another by establishing funds for widows, group purchases of food etc. Workers councils on the local level were formed and in the 1960s military personnel was granted trade union rights. Today, Dutch military personnel has the right of consultation with regards to wages and pensions. Secondly, the military personnel as well as the society recognizes the special position and nature of the military profession. Soldiers do enjoy only limited freedom of speech, do have only access to military healthcare and no right to strike – nevertheless they are willing to put their life in danger to defend the greater good. While the acceptance of military hierarchy is essential, the right to have your voice heard with regards to working and social conditions is thus evident in the Dutch military and society. Finally, the Dutch military trade unions are allowed to promote their work at military academies and schools and recruit new members there. Mr. de Zeeuw concluded that the trade unionism in the military is an integral part of the Dutch military but also widely accepted within the society.

During the Q&A session, different issues were raised by the audience. President Jacob explained that the concept of “Citizen in Uniform” roots back to the establishment of the German armed forces in the 1950s and basically describes a military which is fully integrated into the society it serves. Therefore, the concept is “Citizens in Uniform” rather than “workers in uniform”. A. Lima Coehlo, former President of ANS and Board Member of EUROMIL explained that in Portugal, where the military played an essential role during the revolution giving the democracy to the people, servicemen and -women today are denied some basic democratic rights. He insisted that neither policy-makers nor the society should forget that without people serving, the best tanks and airplanes are worthless. The human dimension of security and defence should therefore not be ignored.

In his closing remarks, Mr. Jacob emphasized that EUROMIL would continue to be the voice of 500.000 soldiers and their families in Europe especially at times where common security and defence are high on the agenda. Promoting the social and human dimension of security and defence is EUROMIL’s core task.

Roundtable on Military Associations in Paris