You are here:Home » Euromil News » NATO Parliamentary Assembly in Budapest 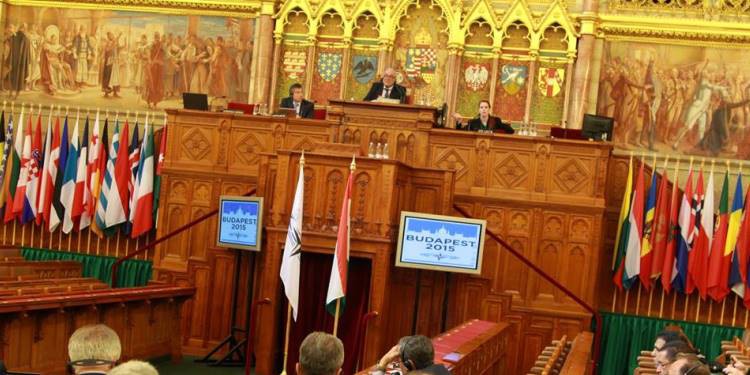 The NATO PA brought over 300 parliamentarians from the 28 NATO member countries from North America and Europe together, as well as delegates from partner countries and observers, to discuss reports, recommendations and declarations. EUROMIL was one of the few observers present at the meeting and monitored two of the committees of the NATO PA.

It is already the third time that the Hungarian capital is hosting the NATO PA. The first time was exactly 20 years ago, even before Hungary joined NATO. It was the first time for the Assembly to hold a session in a non-member country. Five years later, in 2000, one year after Hungary joined the Alliance, a second NATO PA was organised in Hungary.

“Today, our security and the values we believe in are being tested by Russia’s revisionism and recklessness, and NATO is again our first port of call” Hon. Michael Turner, President of the NATO PA, said. He recalled that our governments agreed on a range of decisive measures to respond to the Russian challenge and strengthen our security for the future. A major part of the discussions during this spring session focused on how to ensure that these commitments are met, in full and on schedule. These commitments are costly and demanding, Michael Turner added, and they will require our constant resolve and unity for the years to come. NATO and the European Union should work together, stated several members during their interventions. Cooperation is key!

The Defence and Security Committee took place on Saturday, 16 May 2015. As always, members of the committees do not vote on reports during the spring session, but only present and discuss draft documents in order to finish them for the autumn meeting.

Several interesting reports were discussed in Budapest. The General Rapporteur, Julio Miranda Calha (Portugal), drafted a report on hybrid warfare with the relevant question in mind of whether this will be a new strategic challenge for NATO. Hybrid warfare exploits domestic weaknesses via non-military means – such as political, information and economic intimidation and manipulation – but is backed by the threat of conventional military means. The question is in which degree NATO, primarily a military organisation, can respond to the challenges of hybrid warfare as it falls outside of the classical military arena.

As Special Rapporteur, Mr. Miranda Calha, also presented a specific report on the Post-ISAF period in Afghanistan. The International Security Assistance Force (ISAF) was replaced on 1 January 2015 by the Resolute Support Mission (RSM), an international force to train, advise and assist the Afghan National Security Forces (ANSF). RSM is widely expected to conclude by the end of 2016. At the end of 2014, Afghanistan entered in its transformation decade with full leadership and ownership of its national affairs. The relationship with Afghanistan are normalizing but the stakes remain high for NATO Allies and their partners in Afghanistan and therefore NATO and its partners must consolidate their gains and focus their attention on the success of RSM.

The French Rapporteur, Xavier Pintat, presented his draft report on the Readiness Action Plan. Faced with a new strategic context in the East and South, NATO announced its Readiness Action Plan (RAP). The RAP encapsulates the effort to shore up the situational awareness, mobility and response time of NATO. The report shows however, that several challenges are facing the implementation and effectiveness of the response to new threats, which will require renewed and vigorous political will among the 28 NATO Member States and a comprehensive “whole-of-Alliance” response.

Last but not least, the Hungarian member, Attila Mesterhazy, drafted a report on “Strengthening the Transatlantic Link”, referring to the goals of the Wales Summit. His report examines the progress made towards the implementation of the many important Wales Summit goals. In his opinion the political will of the Member States will be tested by the implementation of the RAP and the realization of the Defence Spending Pledge. However, it is clear that in the face of the distributed threats, the ability for efficient and effective collective responses is more important than ever.

The Political Committee under the Chairmanship of the Portuguese, José Lello, mainly focused on Russia. In this context, a first draft report was presented by the General Rapporteur, Eriks Kalnins, from Latvia. His draft report provides a short overview of Russia’s foreign and security policy and the underlying factors shaping it. The report analyses the impact of Russia’s policy on the Alliance. Several Russian policies and doctrines offer important insights into how Russia views the international environment and its place and role in it.

The draft report touches also on Russia’s military modernisation. Unlike the rest of Europe, Russia heavily invested in its military after the financial crisis of 2008. They increased defence spending by almost 60 % between 2008 and 2013. In the same period, EU Member States cut their defence spending by about 12 % on average. Even the US reduced its defence spending, both in absolute terms and as percentage of GDP after 2011. The expected national defence budget of Russia for 2015 alone is approximately 52,5 billion euros and the Kremlin plans on spending over 318 billion euros over the next five years. Around 80 % of this will be used on high-tech weapons related to nuclear, space, reconnaissance and communications.

Rapporteur Rasa Jukneviciene (Lithuania), of the Sub-Committee on NATO Partnerships, presented her draft report on “NATO’s partners across the globe”. Global partners cooperate with NATO within areas of common interest on the basis of reciprocity and mutual benefit and have access to NATO partnership activities. These partners are encouraged to cooperate with the Alliance on a wide range of political and security-related issues. At present, global partners of NATO are Afghanistan, Australia, Iraq, Japan, the Republic of Korea, Mongolia, New Zealand and Pakistan. Over the years, these partners have made meaningful contributions to NATO-led operations such as ISAF. At the Wales Summit the importance of cooperative security was reiterated as one of the three essential core tasks of NATO. The paper argues that Allies must not put cooperation with global partners on the backburner but should devote sufficient attention and resources to the implementation of the Wales decisions.

Let us remind you once again that the mentioned reports are draft documents and will only be adopted, after amendments, at the autumn meeting 2015 in Stavanger (Norway).

At the closing plenary session, the Deputy Secretary General Alexander Vershbow represented the Secretary General of NATO. As expected, most of the discussion during the Q&A session were on Russia, Ukraine and Libya. However some members had questions on the upcoming EU June Summit on Security and Defence and the declarations on European Armed Forces. “Tricky to comment on what is going on in the European Union” Ambassador Vershbow answered. He added, however, he hopes that there will be some consultation with NATO before the Summit.

Before closing the spring session, the Assembly adopted a Declaration on NATO’s Enlargement. The Assembly is convinced that Allies must continue to affirm and demonstrate their commitment to the open door policy and urges the governments and parliaments of the North Atlantic Alliance:

The Assembly urges governments and parliaments of the countries striving for NATO membership to redouble their efforts to address outstanding issues on their path towards membership and render aspirant countries all possible assistance to help them achieve their goal of NATO membership.

They also recognize the difficult environment, in which Ukraine appears against a backdrop of the unprecedented aggression by the Russian Federation, and encourages the Ukrainian Government and Parliament to put every effort into reforming the country according to democratic Euro-Atlantic standards.

More information on the NATO PA and, in particular, the Spring Session in Budapest, can be found on: www.nato-pa.int

The Position of the President of SOVCG