You are here:Home » Euromil News » My memories of EUROMIL

My memories of EUROMIL 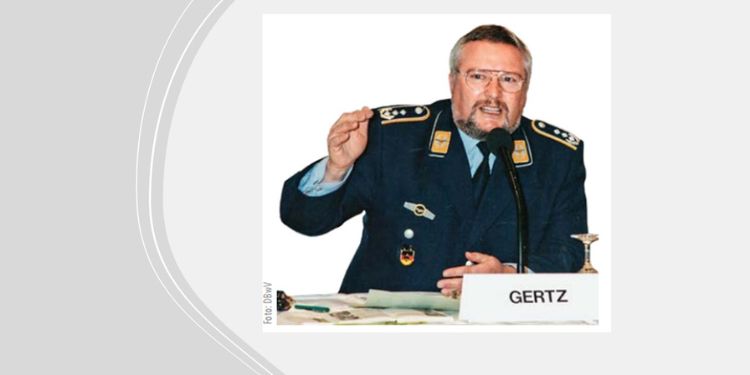 These articles are part of EUROMIL’s fiftieth anniversary commemorations. The original article was written by Bernhard Gertz in German. You can read it here.

The honorary chairman of the DBwV, Col (Ret) Bernhard Gertz, was vice-President for 18 years and also the acting President of EUROMIL for a few months. Today, as Chairman of the Hardship Foundation (Härtefallstiftung, Germany), he is still committed to the social needs of soldiers.

Elected Federal Chairman of the DBwV in October 1993, I replaced my predecessor Rolf Wenzel in May 1994 in the position of Deputy President of EUROMIL.

EUROMIL was since its foundation a registered association under German association law and had its headquarters in Bonn in the house of the DBwV  in the Südstraße 123. EUROMIL’s presence at the European level was embodied by the President, who had to travel quite often, since there was no office in Brussels. EUROMIL’s staff consisted of the Secretary Guido Daleman and a part-time typist, both in Bonn.

For my treasurer Martin Michels, a proven friend of European cooperation, and myself it became soon clear that a sustainable presence on the European level could only be achieved for EUROMIL through an office in Brussels. Not all members of the EUROMIL board were enthusiastic about this idea. We therefore decided to go ahead with a DBwV office in Brussels and set it up in a rented building at 17 avenue de Gaulle in Ixelles. The employees from the very beginning were Jutta Theiss and Hilde Craninx . At about the same time, the commander of the Center for Internal Leadership in Koblenz, Rear Admiral Ulrich Hundt, was about to retire. During a visit to Koblenz, I was able to persuade him to represent the principles of internal leadership and the soldiers’ right of association at European level in Brussels.

We initially commissioned Ulrich Hundt with the tasks of a general representative of the DBwV in Brussels, put the employees under his authority and acquired the property at Avenue General de Gaulle 33 as the final headquarters. After some discussions and with some pressure, we managed to convince the EUROMIL board that Brussels should also be the headquarters of EUROMIL and Ulrich Hundt its Secretary General. Admiral Hundt quickly succeeded in dispelling the reservations that the non-commissioned officer associations had about having a flag officer as Secretary General. His participation in the first row of a demonstration of the European Trade Union Confederation (ETUC) made it clear to all of the members that this admiral was fully behind the goals of EUROMIL.

From the beginning of 2009, I took on the tasks of the general representative of the DBwV in Brussels and at the same time those of the (sole) Vice President of EUROMIL. The cooperation with President Emmanuel Jacob was trusting and harmonious. During this time we had a number of presentations, for example in the NATO-Russia Council (in the presence of the NATO Secretary General) and in the EU Parliament. When we traveled, we campaigned for the soldiers’ right of association, especially in Italy, Spain, France, England and Portugal, but also in Cyprus, Greece, Albania and Montenegro.

Regular participation in events such as the NATO Parliamentary Assembly, the Parliamentary Assembly of the Council of Europe and the Berlin Security Conference, increased EUROMIL’s level of awareness. The commitment to the right of association seemed particularly important to us because against the background of the profoundly different military cultures in Europe, it was difficult for everyone to imagine their compatibility with one another without the right to form staff associations. For this reason, even clear requirements for European armed forces could not be implemented in practice.

From around 2011, the reduction in membership fees by the member associations forced a downsizing of EUROMIL’s staff. The post of Secretary General was abolished and the representative office at 33 avenue de Gaulle was sold. I did not stand for election again in 2012, but until today I still support the work of Emmanuel Jacob and EUROMIL with goodwill.

EUROMIL participation at LMP Board Meeting