You are here:Home » Euromil News » Mission Critical: Inclusive Leadership for the Security Sector 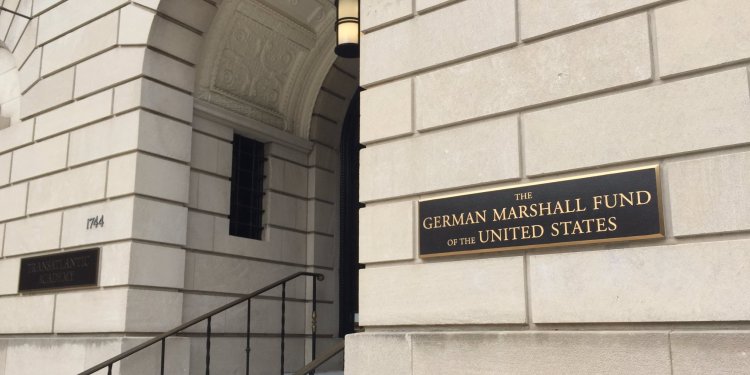 On 27 and 28 July 2017 the German Marshall Fund of the United States (GMF) organised and event entitled “Mission Critical: Inclusive Leadership for the Security Sector” in Washington D.C. in which EUROMIL President Emmanuel Jacob participated.

“Mission Critical: Inclusive Leadership for the Security Sector” was “the third convening of transatlantic partners to explore and advance the practice of inclusive leadership with a focus on security. We (GMF) began in November 2013 with a session on diversity and inclusion (D&I) best practices for militaries, with high level participation from Congress, the Department of Defence, and partner militaries as well as the participation of rising young diverse leaders from both sides of the Atlantic. The resulting community of practice accelerated the transfer of knowledge on leading D&I initiatives across NATO member militaries. We (GMF and partners) reconvened 18 months later in Berlin at the invitation of the German Ministry of Defence (MoD), with the participation of the U.S. and 11 European partner countries. That intensive session resulted in the German MoD forming an office dedicated to Diversity and Inclusion.” (GMF website quote)

At the July 2017 event, inclusive leadership at large was discussed. “As our security personnel at all levels of leadership – engaged to ensure peace and freedom for all in our democratic societies – grow to fully reflect the diverse populations they are sworn to serve, we will become best equipped to inspire new generations to engage in public service. Vital conversations with constituents and stakeholders outside of the security services can richly inform decision making.” Dr. Karen Donfried, President of the GMF stated when opening the conference on 27 July. Lieutenant General Stayce Harris, Assistant Vice Chief of Staff and Director at the Air Staff Headquarters within the Pentagon, made clear that D&I are critical for security forces especially because of the growing impact of refugees and migration.

Several plenary sessions with experts from amongst others DELL, Shell US, Boeing, the Center for Strategic and International Studies (CSIS), were organised. We need to “take things from a good idea to something institutionalised” Fred Whipple, Vice President of Diversity, Community & Workforce of Shell US, said, emphasizing that manager might leave or change but ideas and projects should stay in place. At several occasions, the question of how to change the culture of an organisation was discussed.

During eleven “International Cross Talk” the participants had the chance to discuss important issues in depth and work on topical cases. One of these sessions was facilitated by Nadia Firozvi, Project Manager at the Democracy Fund and Emmanuel Jacob, President of EUROMIL. The session dealt with civil and human rights in the security context. Emmanuel Jacob briefly presented EUROMIL as well as the OSCE-DCAF Handbook on Human Rights and Fundamental Freedoms of Armed Forces Personnel and the Council of Europe Committee of Ministers Recommendation (2010)4 on Human Rights of members of the Armed Forces. Several aspects such as EUROMIL’s basic principle of “Citizen in Uniform” and the recent developments on European defence were especially interesting for the non-European participants from the U.S., Canada and Australia. During the session, one gender related and one transgender related case were discussed by the participants. It was coincidence that US President Trump announced the ban on transgender people in the US military only a day before the GMF event, but was nevertheless debated in the course of the session.

Much appreciated was a visit at Capitol Hill on invitation of US Senator Ben Cardin of Maryland and US Representative Alcee Hastings of Florida. Both addressed the participants on “Inclusive Security: View from Capitol Hill” and gave an interesting overview of the current political situation. Both politicians are dedicated supporters of military personnel’s rights and made it clear that they will not accept the latest decision of President Trump on military transgender personnel: “It is not about how one looks, how one thinks, what your religion or sexual orientation is, … but about if one can perform the military tasks he or she is engaged for!” In this context, they also referred to the refugee discussion making clear that “the US needs immigrants and refugees, today and even more in the future”.

With some imagination, one can see in Cardin and Hastings defenders of the US version of the “Citizen in Uniform” principle!