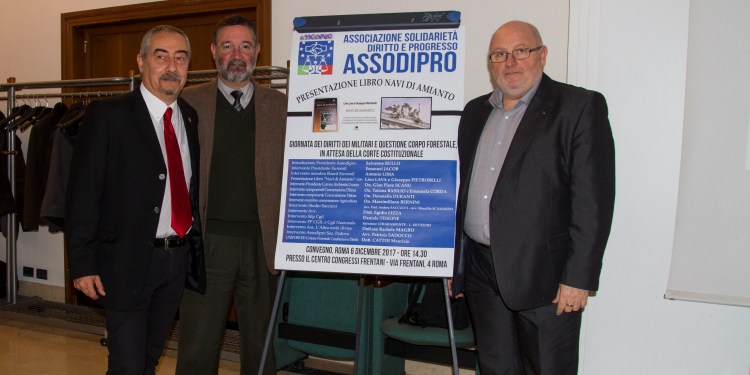 EUROMIL is close to the problems of the Italian military over trade union rights and better protection for work and health. Italy is the European country with the most sick and dead due to missions or a few jobs on the job.

On December 6th the National Conference of our association was held with the title “Military Rights Day, Forestry Department, waiting for the Constitutional Court”. Many and interesting interventions have filled the conference with content, emotion, information, current affairs and passion. Among these flash: On. Corda: “Alongside the military also in the field of trade union rights”. On. Basilio: “Overview of current issues, from NoiPA to proposals on better protection for the military and the family”. On. Scanu President of the Uranio Inquiry Commission: “My bill improves the protections on the work and health of the military, we are told shameful lies to attack it. I thank the members of the M5S for their great commitment to the inquiry committee. the Rubber Wall that opposes rights, transparency and protection for the military is destined to collapse “. Hon. Deputy Chairman of the Committee of Inquiry and Parliamentary Committee of the Defense Committee: “Politics has proved impotent and has failed to propose any conclusive work on military representation despite numerous proposals. In the end, they preferred to resign themselves to the next judgment of the Constitutional Court! “. Mr. Bernini: “The battle, on the anti-historical reform of the Militarization of the Forestry Corps, continues”. Avv. Lizza: “the victories at the Tar, against the militarization of the Forestry Corps come to the Constitutional Court that will have to evaluate numerous articles of the reform”. Avv. Scamardo: “Assodipro arrives at the Constitutional Court by once again putting the question of Constitutionality of the ban imposed on the military to establish unions. The Court will have to assess what happened in recent years, between ECHR rulings and various rulings “. Jacob, President of EUROMIL: “EUROMIL is close to the problems of the Italian military over trade union rights and better protection for work and health. Italy is the European country with the most sick and dead because of missions or a few jobs at work “. Dott.ssa Magro Associazione the other half of the uniform: “our association close to the families of the military and their many problems often unresolved and unheard”. Dr. CATTOI for UNFORCED: “the battle on the militarization continues until a desirable, real and new reform of the Security Section that gives dignity and autonomy to the Civil Forestry Corps”

In thanking all the distinguished and numerous guests who accepted our invitation to intervene and all those who participated, we anticipate and publish some photos waiting to publish, in a special section and article, all the photos and videos of all the interventions.