You are here:Home » Members news » LMP Romania: 10 Years of Activity 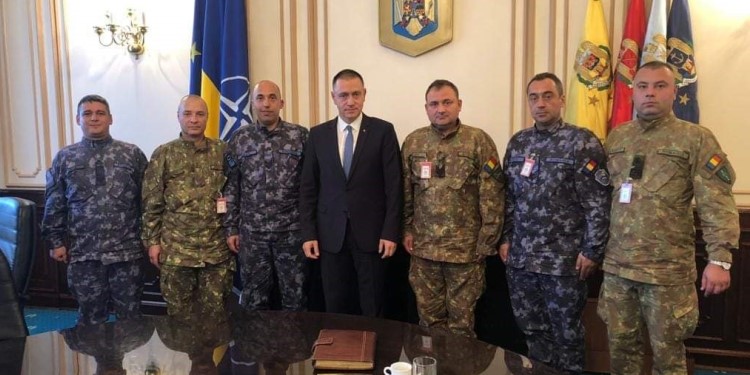 Liga Militarilor Profesioniști (transl.: Professional Military League, abbrev. LMP) is a non-governmental, apolitical and non-unionist association that was founded on 1 June 2010. The military association arises out of the desire to continue a military tradition that dates back to the interwar period, considering that here, in Constanta, was established for the first time in Romania such an association, almost 100 years ago, more precisely in 1928, under the name  of “Cercul Maiștrilor Militari de Marină” (Club of Navy Warrant Officers).

The watchword in this professional association is comradeship, the principle being known and widely applied among all military, and LMP’s mission aims in particular to create a favorable framework for carrying out actions in order to stimulate professional activities,  to develop the desire for performance and competitiveness, to promote the need for consciously approach to interpersonal support interventions, as well as to develop and run events that can contribute to the disconnection from daily stress. Through initiatives carried out in full respect of the law, LMP constantly seeks to develop and cultivate the noble sense of camaraderie and devotion to mankind and country!

Liga Militarilor Profesioniști acquired legal status on 17 September 2010 and, from the very beginning, became actively involved in correcting a discriminatory law by which professional soldiers and ranked military were released from the system at the age of 40, after 20 years of military service, without social protection and without the possibility of accessing part of their civil rights.

The “weapons” used by the League to approach military and political decision-makers have always been dialogue and diplomacy. Thus, during their 10 years of activity, LMP obtained a series of rights for the Corps of Professional Soldiers and Ranked Military (SGP Corps) of the Romanian Army.

Starting first year of its establishment, LMP managed to obtain the “quality of military” trough law, which allows the establishment of a fair status for the Romanian military. Until 2010, contract military personnel contributed to the civilian pension system, which was completely inappropriate compared to the factual situation.

LMP did not stop here, however, and managed to achieve correct classification of all military by working groups in special conditions, in other words, working groups similar to the active military personnel were established by law, recorded in Law 23/2012.

In 2015, another important LMP initiative was transposed into law. Thus, by Law 223/2015, the right to a state military pension for the SGP Corps was obtained.

In 2018, LMP was involved for achieving regulating the granting of monthly rent compensations to those who contract a real estate loan for the purchase of a home. The initiative was transposed into Law 288/2018.

Other initiatives followed in order to support the rights of SGP Corps. LMP requested the granting of the Honorary Order “In Service of Country” for the SGP Corps, which was granted by the state, and intervened for the possibility of advancing of professional ranked military in the corps of military warrant Officers, which materialized by amending Law 80/1995.

The most recent and perhaps the most important victory of the League is related to the change of the SGP status, so that these soldiers could benefit of contracts signed for indefinite period until the standard retirement age, after 15 years in the military system.

Until the Law 73/2020 came to regulate this change, professional soldiers and ranked military were obliged to renew their contracts every 3 years.

On May 13, 2020, the Chamber of Deputies approved the draft law amending and supplementing Law 384/2006 on the status of professional soldiers and ranked military, as a decision-making Chamber and the law was subsequently promulgated by President Klaus Iohannis.

The League fought hard for every provision and right won by the military. The law project was submitted to Parliament by Senator Mihai Fifor, former Minister of Defence.

Law 73/2020 brought important changes in the status of SGP Corps, thus recognizing certain rights for them enjoyed only by military personnel: the right to rest leave, parental leave, medical assistance and free medicines for the military and their families. The most important provision, however, is that the professional military with a length of service of at least 15 years will sign an indefinite contract with the Ministry of National Defence.

The new law provides, among the regulations enumerated, the following:

In the picture: Senator Mihai Fifor, former Minister of Defense accompanied by the delegation of LMP. This article was written by LMP. The original version is available here. For more information, please contact LMP.