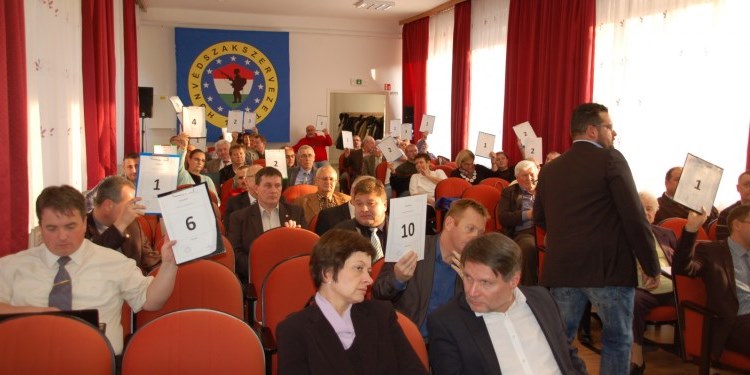 EUROMIL’s Hungarian member HOSZ organised a Jubilee Congress on the occasion of its 25th anniversary on 24 and 25 November 2016.

The event started with ceremonial speeches. In his inaugural speech Mr. János Czövek, President of HOSZ, highlighted that the interests of military personnel in Hungary are formally protected since  25 years: The „Alliance of military personnel for interest protection” was established on 14 September 1991 by two active and seven retired associatons as well as 57 individuals. Its President until 1993 was Mr. Ferenc Horovitz. The Alliance was transformed into a trade union in 1995 and renamed HOSZ – Hungarian Military Trade Union. The first President of HOSZ was Mr. István Sörös. The current President stated that the struggles of the last 25 years were not in vain if looking back one remembers all fights and endeavours of HOSZ and can clearly see their results. The profession of soldier demands exceptional requirements, discipline and self-sacrifice for the defence and security of the state. For this reason the enforcement of interests and the guarantee of individual and collective rights are necessary too. It is needed that HOSZ performs its tasks well by providing a platform for constructive dialogue between employees and employers, supporting and helping its members.

In the following, some appreciations were handed over by Brigadier General János Sulyok, Deputy State Secretary of the Ministry of Defence and Mr. Czövek. In 2016, the award for trade unionism work was given – by decision of the Congress – to Mr. Tibor Mészáros and Mr. Ernő Tarr, leaders of basic organisations.

The actual work of the Congress began after the opening ceremony. The delegates discussed and approved the budget of HOSZ in 2017, the constitutional and operational rules of the „retired section”, the deregulation of former organisational decisions, the main tasks and program of HOSZ, and the work schedule of HOSZ’s Presidium in 2017.

During the ceremonial dinner Mr. Ton de Zeeuw, treasurer of EUROMIL and Chairman of the Dutch MARVER/FNV, addressed the delegates on behalf of the President of EUROMIL, the Chair of the Dutch AFMP/FNV and himself. Later on, the President of HOSZ congratulated the two founding members Mr. István Sörös and Mr. Mihály Volentér with a souvenir.

On the second day of the Congress the representatives could listen to presentations and information about the social situation and the salary of military personnel, actual legislative changes and the reverence care. They furthermore elected representatives for occupational safety.