You are here:Home » Members news » Iberian Meeting on Military Rights 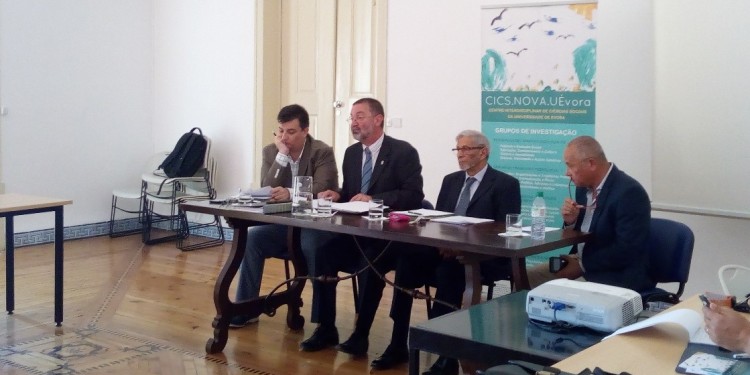 The University of Évora (Portugal), with the participation of military associations from Portugal and Spain, promoted a debate on the social rights of citizens in uniform.

The Interdisciplinary Center of Social Sciences of the University of Évora (CICS.NOVA.UÉvora) promoted Friday, 19 July 2019, in Évora, the 1st Iberian Meeting – Armed Forces: Uniformed Citizens’ Social Rights. There were reports of Dinis Fonseca, from CICS.NOVA.UÉvora, who made a framework intervention, followed by the approach to the Portuguese reality by the retired counselor Bernardo Colaço, on legal and constitutional issues, and by Antonia Lima Coelho, President of the National Association of Sergeants (ANS), on the history of associativism and future challenges. Iñaki Unibaso, Secretary General of the Unified Association of Spanish Military (AUME), spoke about the reality and future prospects of military associations in Spain. In the speeches and in the ensuing debate, difficulties were noted on the one hand with the full recognition of associations and law enforcement by the respective governments and, on the other hand, the need to extend associative rights in order to guarantee them inter alia at collective bargaining level. The opening and closing sessions were also presented by the University vice-president, Rosalina Costa, the coordinator of the Security, Defence and Armed Forces section, Ana Romão, the coordinator of CICS.NOVA.UÉvora, Maria Baltazar, and the deputy director of the Institute of Advanced Research and Training of the University, Ana Matos. Among other aspects, they valued the initiative and emphasized the importance of the topic under discussion and the link between the University and society and the concrete issues with which it is being discussed. Participants included representatives from the Army, the three professional associations of Portuguese soldiers (officers, sergeants and privates) and the Spanish AUME, as well as professional associations of PSP (Police) and GNR (Republican National Guard). According to the organisation, all parliamentary groups of the Assembly of the Republic were invited, but only the Communist Party (PCP) was represented.
It should be recalled, incidentally, that the Communist Party addressed a written question to the Minister of National Defence a few days ago, questioning the fact that the military associations were ‘relegated to second place’, adding that ‘their hearing is, in large part, only formal, “challenging the Government not only to” listen and consider, but to integrate associations representing the military as working partners in building solutions “.

This article was originally published by the “AbrilAbril” newspaper on 20 July 2019 and was kindly translated from Portuguese by A. Lima Coelho.