You are here:Home » Highlight post » How EUROMIL Overcame the ‘Iron Curtain’

How EUROMIL Overcame the ‘Iron Curtain’ 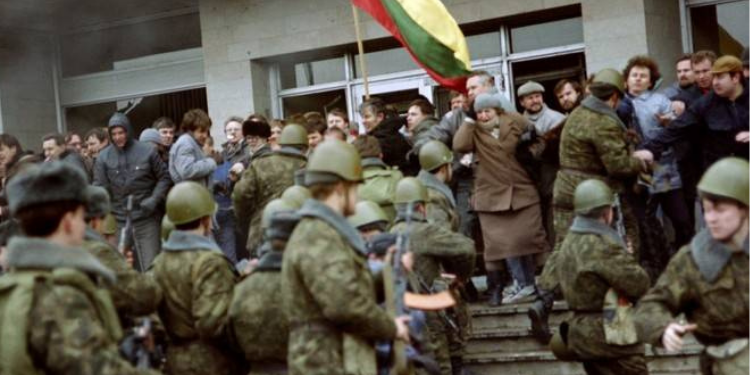 The European Organisation of Military Associations (EUROMIL), in the context of the collapsing Warsaw Pact, assisted soldiers in organising  themselves against the resistance for social and political rights.

One day after German unity was established, on 4 October 1990, the Presidium of EUROMIL met for the first time on the grounds of the former “Eastern Bloc” in Leipzig. The city of the “Peaceful Revolution” was not chosen by chance. As early as 1988, EUROMIL dared to jump over the still existing “Iron Curtain”, establishing contacts with military personnel in the states of the Warsaw Treaty and supporting them in organising themselves to protect their interests. In May 1990, EUROMIL was the first soldier organisation in this military alliance to take on the Association of Professional Soldiers of the DDR (Verband der Berufssoldaten der DDR or VBS), which was founded during the course of the Peaceful Revolution. However, its days were already numbered. A few days before the Leipzig Executive Committee meeting, the VBS decided to dissolve and recommended that its members join the German Bundeswehr Association (Deutschen BundeswehrVerband or DBwV).

By convening the next ordinary general meeting of EUROMIL for 21 February 1991 in Prague, the Presidium complied with the wishes of the Association of Professional Soldiers of the Czechoslovak Federal Republic, which had been set up in the course of the political upheaval. It joined the European umbrella organisation as the 14th association in its capital. Newly founded professional military associations from Hungary and Bulgaria also sought membership in EUROMIL. The fact that the Czechoslovak Defense Minister Lubos Dobrovsky attended the conference as a guest of honor was a sign of appreciation and support for the concept of the “citizen in uniform” embodied by EUROMIL. As a close confidant of the President, he arranged an invitation for the EUROMIL leadership to Prague Castle, where they were received by Vaclav Havel for an interview.

A delegation of the informal soldiers’ union “Schtschit” (“Shield”) headed by the chairman, Lieutenant Colonel Vitali Urashtsev, had traveled from Moscow and submitted an application for membership to EUROMIL. It was founded in October 1989 by around 100 soldiers, officers and reservists with the aim of democratising the army and combatting the ubiquitous corruption and nepotism in its ranks. Their programme contained the demand that the Soviet army “never be used against their people or against foreign peoples.” The seriousness of this demand was embodied by the then 83-year-old honorary chairman Matwei Chapotishnikov . In June 1962, the former general, acting as deputy commander of the North Caucasus military district, refused to assign his tanks to the violent suppression of the workers’ uprising in Novocherkask which had claimed at least 24 lives. Chapotishnikov was placed in the reserve, expelled from the Communist Party and charged with “anti-Soviet propaganda”. His merits as a “Hero of the Soviet Union” during World War II had saved him from worse.

After just a few months, in October 1991, the EUROMIL Presidium decided to accept “Schtschit ” as a full member. This decision recognised the commitment of the Soviet soldiers’ union against the use of military force in the struggles surrounding the breakup of the USSR. After Soviet special forces killed 14 unarmed civilians in Vilnius on “Bloody Sunday”, 13 January 1991 , while trying to occupy the Lithuanian Parliament and the TV tower, an investigative group from “Schtschit” collected documents and tape recordings. Evidence that the paratroopers’ brutal action was “the rehearsal of a violent overthrow” was handed over to Lithuanian officers supporting “Schtschit”. Political hardliners considered the members of “Schtschit” to be “spooks”. Three members of the investigation group, including the deputy chairman of the soldiers’ union, were then arrested by a special unit of the Soviet Ministry of the Interior and temporarily detained on the pretext of “having weapons and narcotics”. International pressure, including from EUROMIL, forced their release.

When in August 1991 a group of conservative functionaries tried to stop the transformation of the Soviet Union into a decentralised confederation of states with a coup d’état, “Schtschit” established connections to senior officers in close proximity to Russian President Boris Yeltsin. This association made an important contribution to the largely bloodless end of the coup attempt and to the restoration of legitimate conditions. The dissolution of the USSR also meant the end of “Schtschit”. Its members got caught between the fronts. In the bloody conflict between the People’s Congress, which was still elected in Soviet times, and President Yeltsin, the “Schtschit” co-founder Urashtsev opposed Yeltsin.

Founded on 17 January 1992 in Saltykovka , a small town in the Moscow region, the Independent Union of Military Personnel (ITUS) faced opposition from top Russian military officials from the start. In a media campaign, the soldiers’ interest group was accused of undermining the fighting spirit of the armed forces and not even flinching from strikes. ITUS received backing in 1994 through its inclusion in EUROMIL. At the same time, the Independent Union of Soldiers of Ukraine (KITUS) was granted observer status.

With bilateral partnerships, experienced associations helped the “younger” member associations from the states of the Warsaw Pact, which was dissolved on 1 July 1991, by imparting not only experience, but also with technology and money. The Danish associations donated computers and photocopiers to the Czechoslovakian partner association. As a “start-up aid” they paid the membership fees for the Latvian Riflemen Association, which was admitted in 1995, for two years. Hungary received support from the Netherlands. The DBwV promoted the Russian soldiers’ union. In a retraining programme named after Tsarina Catherine the Great, who came from Zerbst, and with a job exchange, retiring officers were made fit for the civilian job market.

In the course of eastward expansion, EUROMIL membership grew by 30 percent in the years 1990 to 1993 alone. According to its President Jens Rotbøll, EUROMIL wanted to send a signal for the end of the Cold War and the opening to the East with a meeting of the Executive Committee in Moscow in May 1997 and the adoption of the “Moscow Declaration”. “We respect your work and your goal,” the Ministry of Defense formulated cautiously in its greeting. The reception of the delegation in the Duma and in the Moscow City Hall could hardly hide the contradictory understanding of the compatibility of military discipline and the exercise of rights by soldiers. The official appointments left a mixed, rather disillusioning, impression on the EUROMIL Secretary General, retired flotilla admiral Ulrich Hundt. The “jovial friendliness” with which the Chairman of the parliamentary committee for veterans met the delegation was accompanied by a demonstrative ignorance of the statements about the “citizen in uniform”. While young Russian officers in the conference room of the umbrella organisation of Russian trade unions complained “with anger and passion about the miserable housing conditions, wives’ unemployment, lack of pay, lack of care from superiors,” state television broadcast live the dismissal of the army leadership “due to incompetence, corruption and irresponsibility.”

According to its own information from the year 2000, ITUS had around 40.000 members – a small number compared to the more than one million soldiers in the Russian army. In the course of the reorganisation of the armed forces, the representation of soldiers’ interests could only be organised at the local level. The Ukraine conflict, the annexation of Crimea and the sanctions ended what was until recently only sporadic contact.

Russia’s war of aggression against Ukraine and the character of the Russian army that became apparent as a result made the failure of all attempts at reform by a military representation of interests visible. Judging the policy of understanding and supporting such an organisation, as it was promoted with great commitment by the associations in EUROMIL, in retrospect from its failure, ignores possible alternative developments. Today, EUROMIL member organisations are committed to the rights of soldiers in the “post-socialist” countries of Bulgaria, Montenegro, North Macedonia, Poland, Romania and Slovakia.

PFEARFU: No to the Unequal Reimbursement of Health Care Expenses for the Military