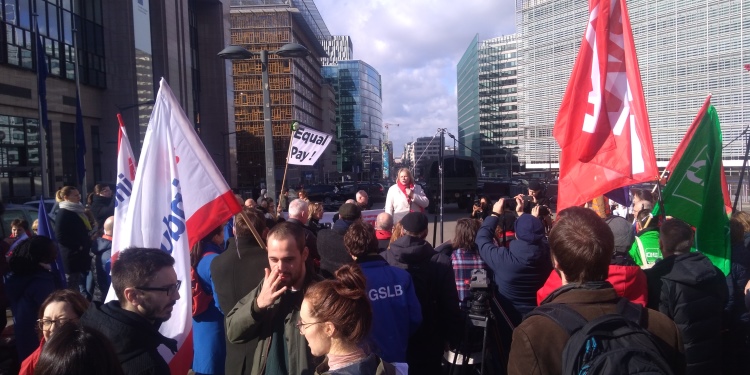 On 25 February 2020 the European Trade Union Confederation (ETUC) organised a gathering in front of the European Commission and the Council to highlight their demand to “end the secrecy” over pay.

ETUC’s Deputy General Secretary Esther Lynch said: “The principle of equal pay for equal work has been enshrined in the European treaties since 1957 so it’s high time to make this a reality. But our research shows once again that voluntary measures to close Europe’s scandalous gender pay gap have failed. That’s why we need make gender pay transparency compulsory in both the private and public sector to unmask the undervaluation of women’s work which lays behind this persistent inequality.”

EUROMIL supports the call for a Gender Pay Transparency Directive. According to EUROMIL’s President Emmanuel Jacob: “Even if one could believe that pay gaps are smaller in the public sector and thus also in the military, we draw attention on the fact that a majority of European countries in 2020 still denies trade union rights and collective bargaining for military personnel. The pay package including all kind of benefits, allowances, compensation measures and even pension systems should be negotiated by the social partners, also in the military. The call from the ETUC is therefore also important for the uniformed workers”.

Detailed information on the Gender Pay Gap campaign can be found here.