You are here:Home » Euromil News » Europe – Developing Capabilities for a Credible Defence 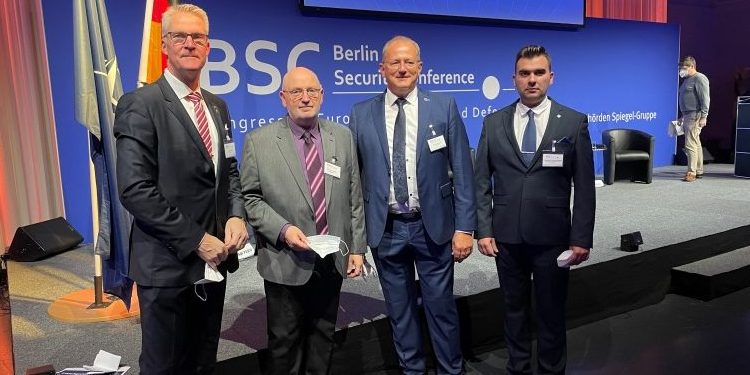 On 24-25 November 2021 the 20th Congress on European Security and Defence, better known as the Berlin Security Conference (BSC), has been organised. After a digital conference in May 2021, the 20th Conference has been held in-person, however limited in numbers and with an adapted agenda and format. As in previous years, EUROMIL was again a logo partner of the BSC2021. Therefore, the Board of EUROMIL was represented at the BSC2021 by a delegation.

During the two days, numerous strategy presentations and keynote speeches by prominent speakers on various topics have been delivered and commented.

After the opening of the conference by the Publisher and Editor-in-Chief of the Behörden Spiegel Group, Mr Uwe Proll, and the Congress President BSC 201, MP Wolfgang Hellmich, a special forum on the aftermath of the withdrawal from Afghanistan. The discussion largely centred on the question of mistakes made in recent years and the harm done to NATO as a result. To that extent, an important intervention was made from an Afghan national on the necessity to assist the people of Afghanistan who are currently still residing in the country and are at risk of repercussions from the Taliban. The discussion also focused on European defence capabilities although the question of whether a real synchronised European defence system would be implemented across the EU was not really delved into. Nonetheless, commentators made the point that if the political will exists within Europe, it will not be necessary to undergo any changes to the treaties of the EU.

Under the motto “save the best for the last”, a high-level military forum concluded the BSC 2021. This panel was attended by the various chiefs of the Army, Air Force, Navy, Joint Medical Service HQ, the CID Service and the Joint Support and Enabling Service and chaired by the Congress President, MP Hellmich. On the upcoming Strategic Compass (EU) and Concept (NATO), the military leaders expressed the hope that both levels could get their act together and decide not only on paper decisions, but also look at the reality to deal with. One should not forget, as one of the speakers stated, that it is not always evident how to switch from a NATO to an EU mission. But this will always be done with the same men and women, we only have one set of armed forces personnel!

Rather unexpectedly, but much to EUROMIL’s delight, at the end of this panel and therefore also the BSC 2021, extensive attention was paid to military personnel and especially the aspect of recruitment. Although attention was focused on the situation in the German armed forces, a comparison can be made fairly quickly that applies everywhere in Europe. It was quite clear from the various speakers that attractivity is an important element of appeal for potential recruits. In addition, the need to make the opportunities and even advantages of a military career more visible was underlined. It is true that there is competition with other employers, but that is precisely why all opportunities must be explained. As was made clear by several representatives, the younger generation think differently about the armed forces in comparison to the current, older generation of military leaders. It is necessary, they underlined, to use all opportunities to adapt to the views and visions of the potential recruits and to train them afterwards for what the armed forces need. It was encouraging that several speakers clarified that a strategy is needed from recruitment to retirement and that in the meantime all career options, inside and outside the armed forces, must be possible.

The fact that the BSC 2021 was concluded with these hopeful elements can only be an impetus to pay attention to military personnel again during the 2022 Conference, as in previous years.

EUROMIL welcomes the EU's Strategic Compass for Security and Defence