You are here:Home » Euromil News » EUROMIL Participated in the OSCE HDIM 2015 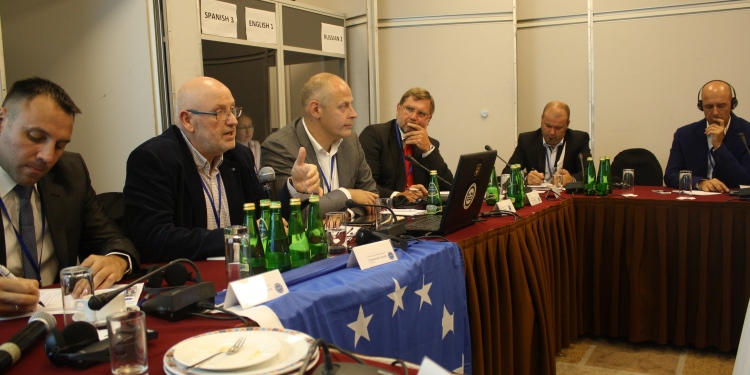 EUROMIL participated in the OSCE Human Dimension Implementation Meeting (HDIM) 2015, which took place from 21 September to 2 October 2015 in Warsaw.

Like every year in autumn, the OSCE Office for Democratic Institutions and Human Rights (ODIHR) hosted the HDIM in Warsaw. The HDIM is Europe’s largest annual human rights and democracy conference which serves as a platform for the 57 OSCE participating States, Partners for Co-operation, civil society, international organisations and OSCE structures to discuss the implementation of human dimension commitments, associated challenges, share good practices and make recommendations for further improvements.

During 10 days, 20 sessions were organised on different human rights and fundamental freedoms’ aspects, to which gathered 1386 participants.

This year, EUROMIL particularly attended the session on fundamental freedoms including the freedoms of peaceful assembly and association on 23 September 2015. On this occasion, EUROMIL submitted a recommendation on freedom of association to the OSCE participating States. The recommendation is published and accessible on the webpage of the conference.

Unfortunately, freedoms of peaceful assembly and association are continuously being restricted in some OSCE participating Sates. Among the statements made during the plenary session, representatives of the European Union noted that “[the Union] attaches a high priority to the promotion and protection of the fundamental freedoms of peaceful assembly and association
[, which] (…) are intrinsic to any democratic society and (…) are also essential prerequisites for the functioning of independent civil society. National Human Rights Institutions and civil society can often form a bridge between the rights of the citizen and the responsibilities of the State and play an essential role in promoting and protecting human rights”. EUROMIL therefore calls upon states to respect the OSCE commitments, as well as all major international and regional human rights instrument to which they had acceded.

Later on the same day, EUROMIL, together with the European Confederation of Police (EuroCOP), organised a side-event on “The Right of Association within the Security Sector”.

As some countries in the OSCE region continue to place undue restrictions on the exercise of the freedom of association for police and military personnel, this side event aimed at exploring the current situation with regard to the freedom of association in the security sector and the important role professional associations and unions can play in this sector. Emmanuel Jacob, President of EUROMIL, Willy Valckx, Member of the Committee of EuroCOP, Aleksandar Popovic, President of the “Serbian Defence Union” (SOS, Serbia) and Alberto Alegria, Representative of the “Unified Association of Civil Guards” (AUGC, Spain) participated in the panel discussion, which particularly focused on the armed and police forces. The event was moderated by Ton de Zeeuw, Treasurer of EUROMIL, and generated interest from the public of the HDIM.

The Presentation of EUROMIL is available by clicking on the following link.

For further information on the HDIM 2015, please visit the OSCE website.