You are here:Home » Euromil News » EUROMIL held its 112th Presidium Meeting in Brussels 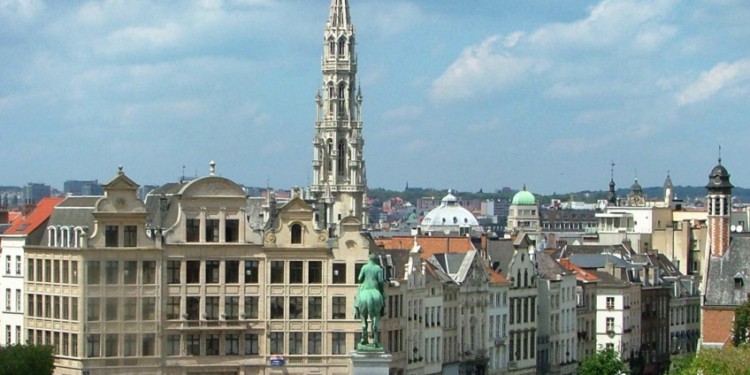 The 112th Presidium Meeting of EUROMIL was held in Brussels on 16 and 17 October 2015. Over 60 delegates representing 24 associations from 17 countries participated in the meeting. The Presidium, which meets twice a year, is composed of the Board of EUROMIL and one appointed delegate per member association. It approves the policy of the Board, provides impetus for the prospective further development of EUROMIL policy, decides on the accession of member associations and approves the budget.

The meeting started with an evening reception on 15 October, where an exhibition on the resistance during the Second World War was displayed with the kind support of the Belgian Veteran Institute.

On 16 October, the President of EUROMIL, Emmanuel Jacob, opened the meeting and welcomed the two distinguished key note speakers, namely Steven Vandeput, Minister of Defence of Belgium, and Rear Admiral Jürgen Ehle, Senior Political Military Advisor in the Permanent Representation of the Federal Republic of Germany to the European Union. Before giving the floor to his guests, E. Jacob addressed the audience with an introductory speech.

The President stated that Europe observes today a fundamentally changed security situation. He mentioned the situation in Ukraine, with Russia, IS as well as the refugee crisis and pointed out that – especially for the European Union – unity is more important than ever in times of crisis. E. Jacob then turned to the role of the military, noting that regrettably soldiers of many European countries do not enjoy basic human rights and fundamental freedoms, and lack the right of association. This is why EUROMIL will continue to fight for the rights of military personnel: EUROMIL must and will be part of the future European defence landscape.

Steven Vandeput, Belgian Minister of Defence, took the floor. He reminded the audience that in Europe people sometimes take security for granted. It should be remembered however that security always comes at a price. Seeing the destabilised security environment in some Arab countries and the Sahel, one has to recognize the direct and negative impact this has on Europe, S. Vandeput emphasised. In this difficult security situation the armed forces need to maintain a certain level of training and equipment. Therefore, the Minister started working on a strategic plan which strives to tackle investment problems, and at the same time deal with the needs of the men and women in service. He made it very clear that social dialogue for him is a necessity since “defence is and always will be a people-driven business.”

Rear Admiral Jürgen Ehle was the next speaker to address the audience. He suggested that looking back at the years 2014/2015 some decades from now, they might be referred to as the turning point. Europe today is surrounded by a “ring of instability”. But returning to national structures will make Europe weaker. What is needed today is a deeper integration and common efforts to address the crisis comprehensively and make Europe stronger. This goes for European politics in general but also for the CSDP in particular. Although it is still a long way to the establishment of the European Army, J. Ehle believes that a European Defence Union is the next step to complete European integration.

Moderated by Dr. Karl von Wogau, Secretary General of the Kangaroo Group and Honorary Member of the European Parliament, five panellists then discussed the question of how the future of European defence could be conceived while respecting a social and human dimension. Karl von Wogau opened the discussion by reminding the audience of the wording of the European Security Strategy of 2003, where it was stated that “Europe has never been so prosperous, so secure nor so free.” If he was to rewrite the strategy again today, he would definitely use different words, since the world has changed so dramatically since then. K. von Wogau invited the panel to discuss the social dimension of being a soldier in this changed circumstances and propose steps to take for the future.

Veli Yüksel, Member of the Belgian Parliament took the floor and advanced four concrete proposals. First of all, the EU should recognise the changed security situation of the world today. In order to best react on this situation, the installation of a permanent operational Headquarter is essential, according to V. Yüksel. But European cooperation in the field of defence should even go beyond a permanent HQ, a Permanent Structured Cooperation (PESCO) could be established and the EU Battlegroups could be used more often.

Jo Coelmont, Senior Associate Fellow at EGMONT, Royal Institute for International Relations and Senior Fellow at Royal High Institute for Defence, clearly stated that “without respecting the social and human dimension there is no future to European defence”. To make his point more clear he shared with the audience some basic considerations about conditions for European engagement abroad. Clear objectives and military tasks are as important as unity of command and a guarantee for the safety of the armed forces and the local population. Only then can a military or civil operation have the support of the people. To deal with the current security situation, J. Coelmont emphasised that the EU needs an overarching global security strategy.

Peter Kallert, Special Assistant in the Office of the Chairman of the EU Military Committee, assessed the current status of CSDP. He pointed out that the crucial factor in CSDP is the decision-making process, which is based on unanimous decisions in the European Council. In other words, all member states of the EU have to agree about an issue. That is the reason why, for example, no permanent HQ could be established yet and no PESCO is introduced so far. On the other hand P. Kallert raised the important question of which common standards a future European Army could be built on.

Paulyn Marrinan Quinn, Senior Counsel and Founding Ombudsman for the Irish Defence Forces shared her experiences in the field of ombudsman work. When she first spoke on a European panel about the importance of having an independent ombudsman for the armed forces, she very quickly realized how great the need for discussions, counselling and mutual assistance in this field was. As a consequence, she launched a handbook in 2008, which today can be seen as the starting point of setting up ombudsmen in all over Europe. P.M. Quinn emphasised that EUROMIL is very well spirited to keep that flame of caring for the social needs of soldiers alive.

Peter Scherrer, Deputy General Secretary of ETUC, reminded the audience that there is always a “human factor” behind the soldier, even though the public sometimes tend to forget it. In this respect, he welcomed a future cooperation between ETUC and EUROMIL on questions of common concern and interest.

The assembly furthermore discussed different internal affairs and held regional collaboration meetings. The request of the Spanish association ATME to become a full member of EUROMIL was unanimously approved by the Presidium, was well as the request from the Italian association LR to become an observer. EUROMIL has now 41 member associations from 25 countries.

The Presidium concluded with three workshop sessions. The first one was designed as a follow-up on the panel discussion about the question of how to conceive the future of European defence while respecting a social and human dimension, the second one dealt with gender equality in the armed forces and the third workshop focused on the Safety and Health Framework Directive in the armed forces. The EUROMIL Office may be contacted for any question related to these issues.