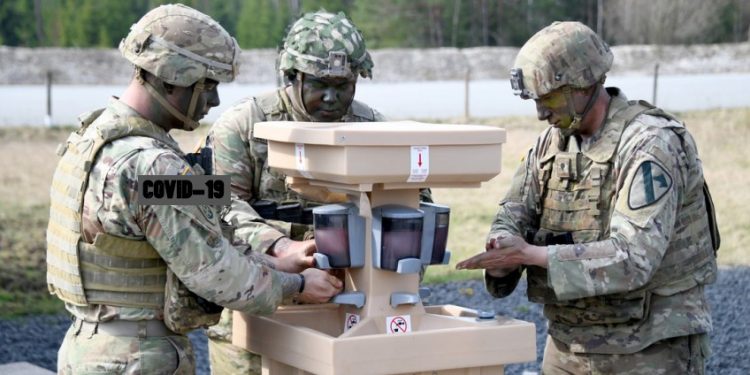 Perhaps it sounds a bit strange to write an article on “the day after” at a time when we have no idea on when and surely not how the COVID-19 crisis will end. However, one should start thinking at the post Corona era and not be too optimistic or pessimistic, but stay realistic!

From the moment the first signs of COVID-19 were detected in Europe, EUROMIL started monitoring the specific measures European countries were taking for their armed forces and their military personnel in particular. We were surprised to find out that, except for the general safety measures such as social distancing and washing hands, almost no specific measures were taken. One could have expected that in such a period of unpredicted crisis, armed forces would have been called to take part in crisis teams and be engaged in national or international crisis plans and would have therefore adopted  specific measures from the start. However, things changed meanwhile drastically. All over Europe exercises and trainings were cancelled, a certain number of barracks were closed and in several countries military personnel got, in one way or another, engaged in fighting COVID-19. Allow us at this point to express our deepest respect for all those – medics, nurses, paramedics, police and military personnel, fire workers but also postmen, logistic workers, employees in the distribution sector and many others – that are working to help and protect their fellow citizens. Unfortunately, we must also express our deepest condolences to the Corona victims and their families.

On 12 March 2020, in a reaction to exercise modifications due to the Coronavirus, General Tod D. Walter, SACEUR, said: “We’ve embraced precautionary measures to safeguard the health not only of our personnel, but also of our communities. The health of our forces is vitally important to maintaining readiness to deter and defend our homelands. We’ve implemented prudent measures to reduce the exposure and transmission of Coronavirus to or from our forces […]. The modification and reduction of exercises is a precautionary measure and does not affect the ability of our forces to respond to threats.” I think that on this point SACEUR actually expresses the view of the majority of the military community: in order to be ready to help our fellow citizens, we must also consider the health and well-being of our military colleagues! Our soldiers are available and ready to be deployed, the question is however if they have the necessary resources to deal with such a crisis!

A lot has already been said and written on COVID-19 and many other things will follow. Starting in China, the virus found its way through Europe and meanwhile reached the United States, spreading day by day further all over the world. Governments and international bodies had to take drastic measures, with or without social accompanying measures – depending on national legislations and political will – for the affected population. Without going into details and without generalizing, it seems that the social accompanying measures that have been taken, are generally acceptable in Europe. At least on short-term, since “time” seems to be the element with which everything stands or falls in this battle.

How long will the crisis last, but especially for how long will the impact of the crisis and the measures that have been taken will affect us? Again, without being able to generalize, voices of experts are heard saying that we will bear the costs of this crisis for decades. On the other hand, unprecedented solidarity and support for certain work groups and professions has emerged in recent weeks. Medical personnel are applauded and voices are being raised, and rightly so, to continue to support and convert this momentum into more correct working conditions even after the crisis. In other words, a view on better wages and more acceptable working conditions for the future!

Without daring to make a comparison with the terror attacks and the subsequent deployment of military personnel for internal security support some years ago, I fear that we, as a military community, will have to dampen our optimism, at least if there is any, when it comes to a view on future positive consequences in the post COVID-19 era. Let me be clear that our persistent criticism of the military’s commitment to internal security and, for example, the migration crisis, is not identical in this regard. In time of real need, urgency and security threats or in the present case health risks for all of us, armed forces (and military personnel) must be engaged to support the population and fight these problems. However, there should also be for them respect for a certain number of issues. This means to have a fair balance between their family life, their personal health and the execution of their tasks. The big BUT is how long this will and should take and how armed forces can at the same time function and execute their essential missions. In this particular situation it will also depend on how society is going “back to normal” in a few weeks or months and how the financial recovery will be handled.

That brings me to the realistic aspect! The transition from this crisis situation to the normal order of the day will not be a walk in the park. The fact that some already put the economic recovery first on human recovery is not an optimistic sign. But in all reality, we must already realize today, without making fatalistic forecasts, that the economic and financial recovery will be tough. Let us be aware that those who hope today that this crisis will shake up our governments and ensure in the near future that our armed forces have the necessary resources to stand ready for the next crisis, will most probably be mistaken. Our political leaders will have to make tough choices to avoid social dramas on the one hand and restore the economy on the other. That they will try to avoid human and social battlefields is the least one can expect!

Inevitably, the choice between budgets for defence or those for health and social security and economic recovery comes up for discussion. With all due respect for the challenge that awaits them, but also with a sense of reality, we can only now appeal to find the right balance. Safety in all its aspects comes at a price and safety also has a social dimension! Only one answer is possible to this challenge and that is that cooperation and coordination is now more than ever a priority.

More than ever, the time has come to turn words into action!