You are here:Home » Euromil News » Commemorating Our History Whilst Focusing on the Present and the Future

Commemorating Our History Whilst Focusing on the Present and the Future 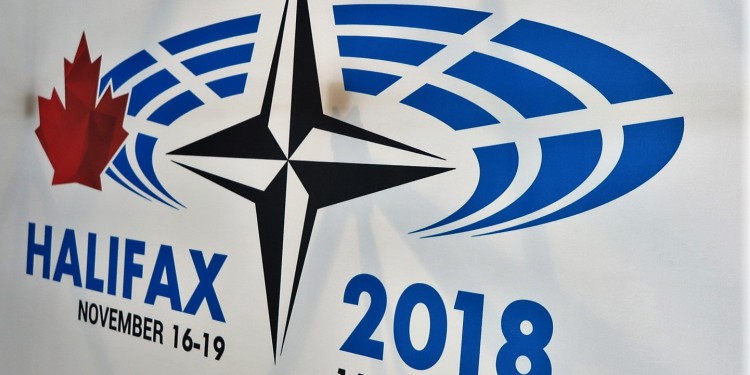 From 16 to 19 November 2018 the NATO Parliamentary Assembly (NATO PA) gathered for its 64th Annual Session in Halifax, Canada. Canada hosted the NATO PA’s Annual Session for the fifth time and was one of the twelve founding members of the Alliance signing the Washington Treaty in 1949.

Welcoming the participants, Borys Wrzesnewskyj, Head of the Canadian delegation, remembered Canada’s sacrifices in Europe during the First and Second World War. Halifax played an essential role in Canada’s involvement in both War’s. But he also highlighted that “the gathering in Halifax is an important symbol of the enduring transatlantic nature of the Alliance. Canadian Forces Base Halifax is the home port for Canada’s Atlantic fleet, also known as Maritime Forces Atlantic – where a number of Canadian vessels that participate in NATO assurance and deterrence measures in Central and Eastern Europe are based.”

Rasa Jukneviciene, President of the NATO Parliamentary Assembly, also paid tribute to the sacrifices of the 60.000 Canadians that lost their lives on European soil and over 200.000 that were wounded. She highlighted the fact that after the Second World War Canada provided a shelter for many refugees from Eastern Europe fleeing communist regimes and repression.

“At the same time as we commemorate our history” President Jukneviciene continued, “our session will naturally focus on the present and the future. Four months ago, in Brussels, our Heads of State and Government set a clear path for NATO to continue to adapt to today’s particularly complex security environment. Over the next four days, we will review many of these priorities, as well as some of the broader issues affecting our transatlantic bond.”

Several draft reports were discussed and adopted. However, the most interesting item on the agenda was a presentation on Canada’s new defence policy by Jody Thomas, Deputy Minister of National Defence of Canada. She highlighted that Canada takes its commitments around the world very seriously. “People are at the heart of our policy” the Deputy Minister said. The Canadian Armed Forces count 101.500 members and the goal is to have 25% female members. From the start of the question and answer session, Jody Thomas was confronted – mainly by US and UK representatives – with the 2 % pledge and the acquisition of F-35 fighter planes. “We have not walked away from the F-35, but we are looking at other options as well. We are looking for the best option for Canada. We are also growing our defence budget and are the 6th leading nation on defence spending. We are looking not just at spending but what we spend it on. One should look at all elements of spending,” she reacted. The Deputy Defence Minister also underlined that Canada’s military budget is growing by 70% and that the country is making significant NATO contributions. On that, the US and UK also said that all nations, not just Canada have to spend more on defence. And with this the tone was set.

The 2%-pledge came back later in the presentation of a draft report on “Burden Sharing”, presented by its rapporteur Attila Mesterhazy (Hungary). A remarkable part of this report is the statement that “critics of the 2% benchmark also note the NATO definition of defence expenditures does not address some of the broader, and ultimately more nuanced and difficult to calculate, challenges to security today. This extends from the range of political, economic, and social disruptions caused by hybrid tactics to dealing with the root causes of terrorism and climate change through such channels as development assistance and new regulations. Actions to bolster whole-of-government resilience in the face of potential non-conventional hybrid tactics do not figure in the above-mentioned criteria for Allied defence spending reporting.” The most often cited example of an alternative approach is the 3% proposal made by Wolfgang Ischinger at the February 2017 Munich Security Conference. Ischinger’s proposal would include 3% to deal with “crisis prevention, development assistance, and defence”. The 2% defence spending metric would be coupled with the UN goal of nations dedicating of 0,7% GDP to development aid, etc.”

When the resolution on “Burden Sharing” was discussed, some amendments were proposed. Representatives proposed changes to link the resolution as close as possible with the Wales Summit pledge. The U.S. on the other hand proposed to delete the reference to the above mentioned 3% spending, arguing that NATO is a military alliance and that additional spending for ‘other issues’ should not be taken into account to calculate defence spending.

Last but not least, the Defence and Security Committee elected several Committee and Sub-Committee Officers. As the Chair of this Committee, Raymond Knops, became a member of the Dutch government he had to resign from his position. The Acting Chairperson, Michael R. Turner from the U.S., was the only candidate to succeed Knops and was elected Chair of the Defence and Security Committee. The Republican Congressman Turner has a lot of experience in the NATO Parliamentary Assembly and was the Assembly’s President from 2014 to 2016.

On the agenda of the Committee on the Civil Dimension of Security was a panel discussion on Women, Peace and Security. Because this topic is also high on EUROMIL’s agenda, the President attended the debate. The discussion was based on the survey conducted by the NATO Parliamentary Assembly on “The role of parliaments in NATO member countries in advancing the Women, Peace and Security agenda”. The paper was commissioned to DCAF by the NATO Parliamentary Assembly in 2018. The authors were Sarah Ferbach (Institut d’Etudes Politiques de Bordeaux, France) and Audrey Reeves (Virginia Polytechnic Institute and State University, USA). The latter presented the paper to the Committee.

The two other panellists, Mark Gwozdecky (Assistant Deputy Minister for International Security and Political Affairs, Canada) and Ambassador Clare Hutchinson, NATO Secretary General’s Special Representative for Women, Peace and Security, added their views on the topic. “12% of personnel in NATO deployments are women, although not enough, we’re getting there. We need to mainstream gender in all aspects of our work. Sustainable peace is not possible without full empowerment of women”, Clare Hutchinson emphasised.

On Monday 19 November, Rasa Jukneviciene, President of the NATO Parliamentary Assembly opened the plenary sitting. In her speech she touched on the 2 % pledge, future membership and partnerships of NATO as well as the relation with Russia. At this point she also thanked the Assembly for having had the opportunity to serve the past months as acting President of the Assembly after Paolo Alli had to resign because he was not re-elected as member of the Italian Parliament.

Harjit Singh Sajjan, Minister of Defence of Canada, addressed the audience. Being the host nation, he especially emphasised on the engagement of Canada in NATO. Minister Sajjan pointed out that the debate on defence spending is a priority in Canada. However, he also highlighted the importance of military personnel and the need to support their families.

NATO’s Deputy Secretary General Rose Gottemoeller addressed the Assembly for almost two hours and answered questions on all kind of issues coming from parliamentarians. On the internal and sometimes public discussions between allies, she answered: “I think of NATO as a family and families can have disputes. But families don’t disappear.” EUROMIL was pleased to hear that also the Deputy Secretary General paid tribute to military personnel for their engagement. Gottemoeller also answered questions on the EU -NATO cooperation. She said that she sees more progress in this cooperation, even significant in certain areas. This is needed, she emphasised, because NATO cannot do or answer on everything. Cooperation with the European Union, but also with the United Nations, is needed. “We need more of this collaboration” the Deputy Secretary General concluded.

Furthermore, the Assembly discussed, amended and approved the budget 2019 and several resolutions that had been discussed during the two days of Committee meetings, as well as the spring meeting in Warsaw.

Last but not least, the Assembly elected Madeleine Moon a member of the British Parliament from the Labour Party as its new President. Madeleine Moon is a member of the British Parliament since 2005 and joined in 2009 the House of Commons Defence Select Committee. This Committee examines the expenditure, administration and policy of the Ministry of Defence. Since 2010, Madeleine Moon is part of the UK NATO PA delegation and a well-known and respected member. She is the first woman elected as President of the NATO Parliamentary Assembly. In her speech she mentioned that she will have special attention for the young Atlantic community and the Women, Peace and Security agenda.

More information, such as the reports and resolutions, can be found on the homepage of the NATO PA. The Spring Session 2019 will be hold in May in Bratislava (Slovakia).

Platform of Women in Spanish Police and Military