You are here:Home » Euromil News » Climate Change and the Role of the Military

Climate Change and the Role of the Military 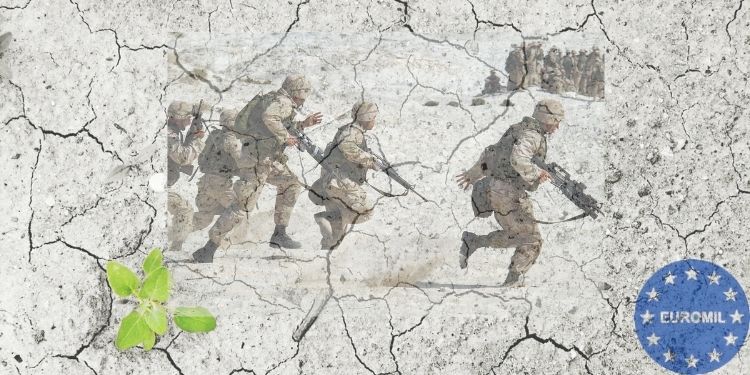 EUROMIL – in cooperation with GMACCC- organized on 25 February an online panel discussion on Climate Change and the Role of the Military. The discussion evolved around EU’s actions towards the ‘greening’ of the military and civil society’s point of view on what should be done next.

The president of EUROMIL, Mr Emmanuel Jacob started the discussion by stating that EUROMIL has joined the European Climate Pact by making a pledge to contribute into brining the topic of climate change and defence into the policymakers’ agenda; by making changes into how the militaries are operating, their environmental footprint could be significantly reduced. Furthermore and according with EUROMIL’s internal survey on climate change, the majority (92%) of the participated members stated that they would like EUROMIL to become more engage into the climate change discussion.

The representative of the European Defence Agency (EDA), Dr Constantinos Hadjisavvas presented the agency’s ongoing work towards sustainability in the military, as the Energy Consultation Forum or the Circular Economy in Defence Forum. On another point, Ms Linsey Cottrell from the Conflict and Environment Observatory (CEOBS) highlighted that the current reporting of military emissions is poor and more transparency is needed in order for the militaries to reduce their environmental footprint and avoid the risk of green-washing.

Besides, the participants underlined that international organisations as NATO or the EU are understanding the important connection between climate change and the military and hence the need to work towards the ‘greening’ of the sector. EU’s defence initiatives, as the Permanent Structured Cooperation (PESCO), the European Defence Fund (EDF) or programs as HORIZON Europe could significantly contribute into climate adaptation in the military. More cooperation with the civil society could also have a positive impact in this regard.

The President of EUROMIL also underscored that military personnel need to become more informed about climate change, as it has a direct impact on their missions; training officers and soldiers to better respond and adapt to climate change is becoming more and more essential.

Lastly, the moderator, Jamie Shea, concluded that investments and modernization of capabilities is important and to the extent that it is possible the military should acquire ‘green equipment’ to adapt to the global threat of climate change.