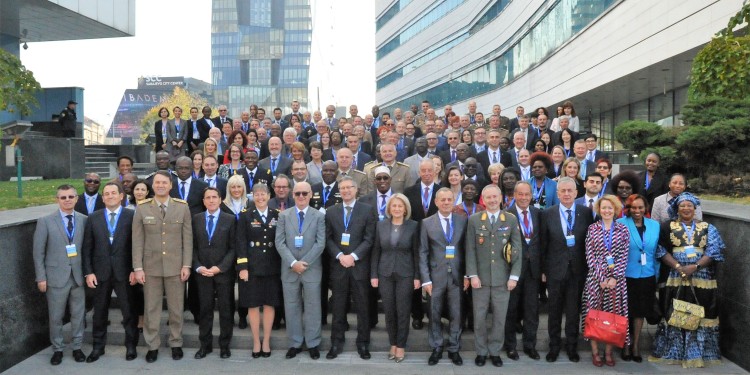 Since its first meeting in Berlin in 2009, EUROMIL participates at the yearly meetings of the International Conference of Ombuds Institutions for the Armed Forces, better known as ICOAF. Among the participants, EUROMIL is one of the rare participants not being an Ombuds Institution. However, EUROMIL believes that a good understanding and collaboration with these institutions can only be in benefit of military personnel.

The eleventh ICOAF meeting (11ICOAF) was held in Sarajevo (Bosnia and Herzegovina, BiH) on 27-30 October 2019 and organised by the Office of the Parliamentary Military Commissioner of BiH, Boško Šiljegović. His Office has been established in 2009 and is based on the example of the German Parliamentary Commissioner for the Armed Forces. The 11ICOAF was co-sponsored by Germany, the Netherlands, Norway and the Konrad Adenauer Foundation. Since many years EUROMIL has a very good contact with the BiH Commissioner’s Office. Unfortunately, this could until now not lead, despite the strong support of the Commissioner, to the implementation of the right of association or trade union rights in the BiH armed forces.

The theme of 11ICOAF was “Building Resilient and Sustainable Ombuds Institutions”. During the conferences of the past years it became clear that ombuds institutions all over the world increasingly became the target of attacks from the military, the executive side and prominent figures in society. These attacks have been manifested through questions on independence and impartiality of the institutions but also by reduced budgetary allocations and lack of cooperation. Therefore, 11ICOAF discussed how to increase the resilience of ombuds institutions and how to maintain their momentum in protecting the rights of soldiers and in this way contributing to a more effective military. And aren’t these the same challenges that EUROMIL and its member associations must tackle?

Looking for answers on the existing threats

To discuss these topics, five main sessions and several breakout groups have been organised. During these sessions, participants discussed various ways in which ombuds institutions can strengthen their resilience, including by adopting international standards, such as the Paris Principles and Venice Principles, to ensure that all institutions adhere to similar minimum standards, while also acknowledging the differences of each ombuds institution. They also reiterated the importance of greater cooperation and coordination with other public bodies, both internal and external to their respective countries, to increase their resilience against the above-mentioned threats. One of the main challenges, but at the same time an opportunity, is that the ICOAF participants are a hugely varied audience with very different mandates and working methods. Some of them have a very broad mandate, such as the German or the Irish Parliamentary Commissioner, while other ones are more military bodies, such as the Inspector Generals, or even complaint offices that are directly dependent on the MOD or the CHOD, such as among others the Belgian complaint officer. However, in some cases there is a collaboration between several stakeholders. The Dutch delegation for example, is composed by the National Ombudsman, the Inspector General and the Ministry of Defence all bringing their specific competences together.

However, all participants acknowledged the importance of their independence in ensuring that they can effectively carry out their mandates to exert oversight of the armed forces and protect and promote the rights of armed forces personnel. It should be noted that independence is crucial to ombuds institutions for the armed forces in order to grant them impartiality, effectiveness and credibility. And therefore, ombuds institutions should continuously work to strengthen their mandate to be more effective and to better adapt to fit an increasingly changing environment.

How to deal with some of the threats has been discussed in thematic breakout sessions. One of the groups has been led by EUROMIL’s President and was dealing with inadequate resources and more specifically the budgetary cuts. During this debate participants from Belgium, Benin, BiH, Canada, Costa Rica, the Czech Republic, Ireland, Kenya, Kosovo and South-Africa, looked at the budgetary situation of their institutions and compared them between themselves. Also on this point, it was interesting to see that there is a wide variety on how budgets are composed and/or decided upon. Based on last year’s consultation of the ICOAF participants, budgetary cuts were identified as the most concerning threat for ombuds institutions. Closely related to this issue, the problem of staff cuts was discussed. Even those institutions which had no own budget and work mainly integrated in the armed forces, saw the personnel problem as a threat for their service and this related to the overall budget of the defence forces. Additionally, indirectly related problems were discussed such as housing, equipment, IT and other resources. The breakout group concluded, that whatever happens ombuds institutions should be able to invest in training and education of their personnel in order to guarantee the future work of the institute. Hereby it was mentioned that a long(er) term planning of budgets would be desirable.

The last session also discussed how ombuds institutions can contribute to sustainable development and which are the links with the Sustainable Development Goals (SDGs). Prevention has an important role, and if ombuds institutions can anticipate specific problems before they spiral into larger issues, they can contribute to more peaceful, just and inclusive societies, which is the aim of the SDGs. 11ICOAF concluded that the immense policy clout surrounding the 2030 Agenda for Sustainable Development offers a window of opportunity for oversight bodies to raise their profile as vehicles of Human Rights and Good Governance.

On Wednesday 30 October 2019 two side-events were organised. One of them was organised by EUROMIL in collaboration with DCAF Geneva, as main organiser of ICOAF and OSCE-ODIHR, the Office for Democratic Institutions and Human Rights of the OSCE. EUROMIL, started discussing whistleblower protection in the armed forces with DCAF and ODIHR more than a year ago, in the framework of a panel discussion on the right to freedom of speech for military personnel at the OSCE HDIM 2018. For the organisation of this side-event, EUROMIL contacted Anna Myers from the Whistleblowing International Network (WIN). WIN brought a team of collaborators and expert speakers to Sarajevo for this event. Participants from amongst others Albania, Belgium, BiH, Georgia, Kenya, Kosovo, Malaysia, Poland, Serbia, and Zambia discussed the topic by means of a case scenario followed by plenary debate and presentations.

Whistleblower protection is a topic that has moved to the centre of attention in recent years and which does not only concern Mr. Assange or those who revealed misconduct in the banking sector. Whistleblowers play a democratic role in our society by reporting or disclosing information on a threat or harm to the public interest in the context of their work-based relationship, whether in the public or private sector. Protecting them is a matter of fundamental rights because it is based on freedom of expression and information. In the military, whisteblower cases in recent years concerned issues of sexual harassment, extreme right behaviour, mistreatment of recruits or misuse of chemical agents. Blowing the whistle in the armed forces is particularly difficult due to restrictions imposed on freedom of expression/ speech, professional secrecy and national security concerns. Problems are also linked to internal reporting and the respect of the chain of command.

But soldiers should be considered as “workers” and deserve the same level of protection as workers of any other professional categories. The principle of “Citizens in Uniform” should apply, granting the same rights and obligations to soldiers as to any other citizen. Currently, the protection offered to whistleblowers varies across countries and is fragmented. EUROMIL has gathered data and is still looking for information about national situation as regards whistleblower protection and existing provisions, if relevant, in the armed forces, not only in Europe. The US model was presented by Irvin McCullough, National Security Analyst at the Government Accountability Project in Washington DC.

EUROMIL welcomes the EU Whistleblower Directive, which was presented at the event by Vigjilence Abazi, Assistant Professor at the Faculty of Law and a Research Coordinator at the CERiM, that will now enter into forces and will need two years for being transposed into member states legislative systems. However, there are shortfalls in the EU Whistleblower Directive to be tackled. The main problem is the blanket exception on national security. An important question is the implications it may have for the armed forces personnel but also for the ombuds institution, a question that was further addressed by the panel. Other important elements for EUROMIL to lobby in the transposition phase of this Directive will include the need to ensure or strengthen protection to whistleblowers who reveal breaches to public interests on issues of working conditions, non-discrimination as well as occupational health and safety. Also, the work done at the Council of Europe level and the resolution adopted recently by the PACE is extremely important.