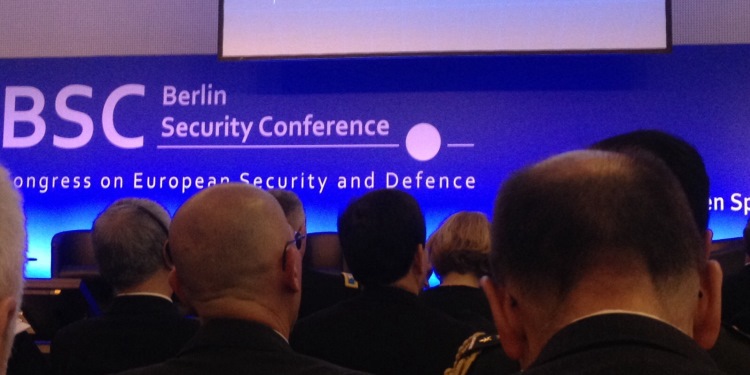 The 14th Congress on European Security and Defence, Berlin Security Conference, one was of the largest events on European Security and Defence, was held on 17 and 18 November 2015. The meeting, to which participated approximately 1000 persons from over 50 countries, including the Board of EUROMIL, was organised by the German independent newspaper Behörden Spiegel, with the United States as partner country. High-level politicians, military officials and representatives of the industry debated during the two days the Euro-Atlantic partnership as a “firm anchor in a turbulent world”.

The Conference was opened by Ambassador Victoria Nuland, Assistant Secretary of State for European and Eurasian Affairs of the U.S. Department of State, and Dr. Hans-Gert Pöttering, former President of the European Parliament and Chairman of the Konrad Adenauer foundation. Both stressed the changed security situation the world is facing today: Islamic terrorism, of which the Paris attacks from 13 November 2015 were a sad example, the war in Syria, the role of Russia in Ukraine, but also in Syria and the refugee crisis. In such a complex situation it is of utmost importance for Europe and the U.S. to stand and act together, to find a holistic response to the challenges we are facing.

A lively debate was held on a panel involving amongst others Ambassador Alexander Vershbow, NATO Deputy Secretary-General, Aleksey Meshkov, Deputy Minister of Foreign Affairs of the Russian Federation, and Ambassador Sir Sebastian Wood of the British Embassy in Berlin. The question whether the Paris attacks and the increasing threat of Islamic terrorism are a reason to work together more closely between Europe, the U.S. and Russia led to a discussion about the relationship with Russia in general. In this regard, the annexation of Crimea by Russia was mentioned as a reason for the problematic relationship and mistrust from a Euro-Atlantic perspective, while the Russian deputy Minister stressed his view of being threatened by EU- and NATO enlargement.

Later on, Ambassador John B. Emerson, Embassy of the United States in Berlin, pointed to three other areas which had not yet been mentioned in which Euro-Atlantic cooperation will be beneficial to all, namely cyber security, climate action and trade and investment.

The second day was opened by a speech delivered by Jean Asselborn, Minister of Foreign and European Affairs of Luxemburg. Referring to the Paris attacks, he stressed the need to not mix the refugee crisis with the terrorist threat. In his view, the European Union stands at a critical point and needs to take decisive action in order not to fall apart but to uphold its values and ideals.

In an interview that followed the opening speech, Michèle Alliot-Marie, MEP and former Minister of Foreign and European Affairs of the French Republic, made it clear that the priority for the French government today is to fight IS. In order to effectively fulfil this objective, she showed readiness to cooperate with Russia. This idea was echoed by Ambassador Alexander V. Grushko, Russian Federation Permanent Representative to NATO, who declared that there is no other way to deal with global challenges such as terrorism than through cooperation. The consequences of the invocation of the mutual defence clause, Art 42.7 of the Lisbon Treaty, by the French Government on Monday after the Paris attacks were briefly discussed as well.

Several panel discussions were organised in between plenary sessions.

Emmanuel Jacob, President of EUROMIL, spoke on the panel about “Services and Training – mandatory for procurement”. In the course of the discussion, different issues ranging from interoperability of systems, the privatisation of services and public-private partnerships were discussed. Stating that the human and social factor cannot be ignored, Emmanuel Jacob called to provide soldiers with the best training and equipment possible, in order to protect their lives and enable them to end their operations successfully. In the light of the current security situation in Europe, he also reminded the participants that cooperation within the EU is essential. This could be achieved very practically in the form of trainings in multinational environments.

The Berlin Security Conference closed with a session on hybrid warfare. First the Deputy Defence Ministers of both Georgia and Ukraine spoke to the audience about the experiences their respective countries have made with hybrid threats. Both emphasised that the issue of strategic communication is extremely important in order to counter misinformation campaigns from Russia. A high-level military forum then exchanged on their views, stating that there is a wide range of new challenges posed by hybrid warfare.

In his closing remarks, the President of the Berlin Security Conference, Ambassador Jiri Sedivý, expressed his gratitude for the lively and fruitful debates, as well as the many different opinions and issues raised in the course of this successful conference.

The complete programme of the Berlin Security Conference can be found online.