You are here:Home » Euromil News » “A powerful Ukrainian army is a guarantee of security in the whole European region” 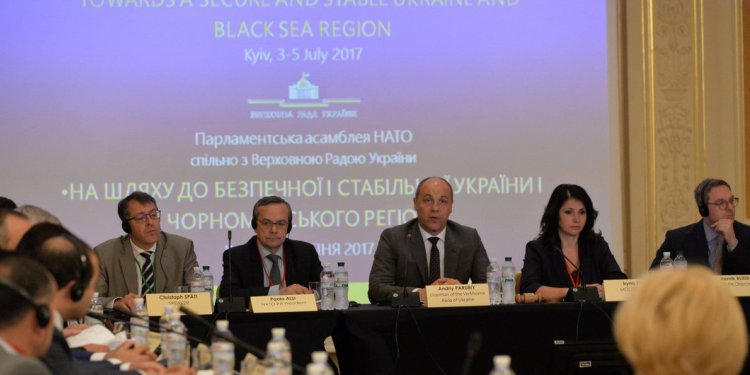 From 3 to 5 July 2017, the 95th Rose-Roth Seminar of the NATO Parliamentary Assembly (NATO PA) has been held in Kiev in cooperation with the Ukrainian parliament. “The Rose-Roth programme of co-operation with the parliaments of Central and Eastern Europe (CEE) was initiated in 1990 by then President of the Assembly Congressman Charlie Rose and Senator Bill Roth. The original goal of the programme was to assist partner countries in Central and Eastern Europe through their challenging transition process to democracy after the fall of the Berlin wall, which involved the implementation of difficult political and economic reforms.” (NATO PA website quote)

The NATO PA has held four Rose-Roth Seminars in Ukraine since the beginning of the programme in 1991. The 95th meeting covered the full spectrum of internal and external challenges Ukraine faces. Beyond Ukraine, the seminar also paid special attention to overall Black Sea security challenges, prospects for closer economic cooperation in the region as well as the current political situation in the Republic of Moldova. It furthermore provided the opportunity to commemorate the 20th anniversary of the NATO-Ukraine Charter at the occasion of a special session in the Plenary Hall of the Ukrainian parliament on 3 July 2017.

Ukraine’s most senior officials addressed the seminar and discussed with the participants, as well as representatives from NATO and the EU and independent experts. The seminar brought together almost 200 participants, including 80 members of parliament from 29 NATO member states and partner countries.

“A powerful Ukrainian army is a guarantee of security in the whole European region“, the Chairman of the Ukrainian parliament, Mr. Parubiy Andriy said. “In the past three years, the number of supporters of Ukraine’s accession to NATO has risen to 50%. Four or five years ago, thanks to a very strong Russian propaganda, we had in Ukraine about 16 to 18% of the population supporting NATO membership. Given the results of recent polls, the number of those who in a referendum would vote in favour, would be more than 60%. This figure is extremely important and shows an increase of the role of NATO in Ukraine.” Mr. Parubiy Andriy went on to argue that the strong support of NATO membership is closely linked to the Russian aggression against Ukraine.

In turn, the President of the NATO PA, Mr. Paolo Alli said that the NATO PA strongly condemns the aggression of Russia against Ukraine and called once again on the governments to strengthen their practical support for Ukraine. He pointed out that this support is not only needed for Ukraine, but also to defend NATO allies. “Our position on Ukraine is clear and strong. We condemn the Russian occupation of the territory of Ukraine, a further violation of the Minsk agreements, violations of human rights in the region, support the Euro-Atlantic integration of Ukraine and urge our own governments to raise and strengthen practical support to Ukraine on bilateral and multilateral basis.” President Paolo Alli continued. At the same time, he urged the Ukrainian authorities to strengthen the fight against corruption and oligarchy.

On the Ukrainian army, Mr. Parubiy said that it is one of the most powerful in the European region. According to the Chairman of the meeting, this is of great importance to the security of the entire European continent, but especially the Black Sea region, given the particularly aggressive Russian actions.

The first Deputy Chairman of the Ukrainian parliament, Ms. Irina Gerashchenko, reported that over the entire period of confrontation with Russia, more than 10.000 civilians from the Ukrainian and Russian sides have been killed in the Donbas. “Of course, this is not an exact figure. Obviously, we should look for each person and determine their fate only after the end of the conflict.” Ms. Gerashchenko noted and added that according to the Tripartite Contact Group, currently 132 hostages are in the separatists’ captivity in the Donbas. Amongst them both military and civilians. Moreover, 408 Ukrainian persons are reported missing.

EUROMIL participated as an observer at the 95th seminar and used the opportunity to meet with representatives of the Ukrainian military trade union as well as a representative of one of the many Veteran associations to discuss future collaboration. The Ukrainian representatives informally shared their views on several of the above-mentioned statements and it did not came as a surprise that their opinions differed on several issues.