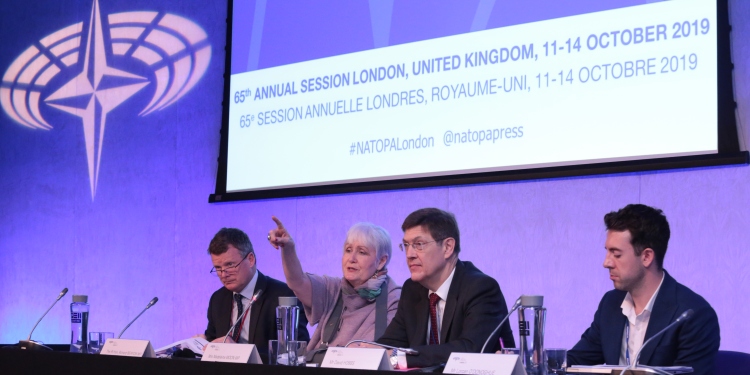 From 11 to 14 October 2019 the NATO Parliamentary Assembly (NATO PA) gathered for its 65th Annual Session in London, United Kingdom. London marks a milestone in the Alliance’s history with the celebration of the 70th anniversary. “Our Session is not only well located, it is well timed” MP Madeleine Moon, President of the NATO PA wrote in her welcome message. “In less than two months, Allied heads of state and government will gather in London for their 2019 Leader’s Meeting” she continued.

On his turn the leader of the UK delegation, Rt Ho. Richard Benyon MP, emphasized that “despite the obvious temptation to look back at the past of the assembly and NATO more broadly, this session is an important opportunity for us all to look forward to the future of the Alliance.”

First speaker at the DSC was Air Chief Marshal Sir Stuart Peach (United Kingdom – Air Force), the 32nd Chairman of the Military Committee of NATO and the Military Adviser to the Secretary General and the North Atlantic Council. “We need to speed up, innovate, adapt more quickly and at NATO HQ we work on that” he said. For the Chair of the Military Committee, NATO but especially its member countries should adapt quick(er) and in a flexible way.

Then the floor was given to Professor Michael Clarke. Michael Clarke was Director General of the Royal United Services Institute (RUSI) from 2007-2015, where he remains a Distinguished Fellow. He is a Fellow in Defence Studies at King’s College London; currently a specialist adviser to two Parliamentary Committees, and an Associate Director of the Strategy and Security Institute at the University of Exeter, UK. On Russia Prof Clarke said that they are a declining force and that history is not on Russia’s side. But Russia is a threat especially to Europe, and they are capable to make Europeans life difficult. When he addressed the post Brexit period, he emphasised that everything Britain will do together with their EU friends in the field of the military, will be voluntary. For Clarke the challenge is and will be that we need more capabilities and that having forces in case of crisis and get them out in the field is extremely important. Finally, he touched up sharing intelligence. “Our intelligence collaboration is better than before 09/11 but not what it should be. We tell each other what we think the other should know, not everything” he stipulated.

After two presentations on the Post-INF Challenges and Iran’s Regional and Global Challenge, Senator Joseph A. Day (Canada) presented as General Rapporteur his draft General Report on “A New Era for Nuclear Deterrence? Modernisation, Arms Control, and Allied Nuclear Forces”. In his conclusions and recommendations Senator Day made clear that “NATO parliamentarians have a duty to be aware of the of the evolution of the Alliance’s role not only as nuclear alliance, but as an alliance working to promote arms control, non-proliferation, and disarmament.” Furthermore, he pointed out that since the Cold War peak, the number of nuclear weapons committed to NATO defence has been reduced by more than 95 percent!

Closing the first day of the Committee Meetings, Senator Day commented on the amendments that were introduced on the draft resolution on “Recent Developments in Afghanistan”. With this draft resolution, the parliamentarians urge NATO and its partners “to build a capable, self-sustaining, and professional military force working to create the conditions for enduring peace and stability in Afghanistan.” The resolution places emphasis on maintaining the “significant advances made by Afghan women across all sectors of society and by the determination Afghan women have shown in seeking to preserve and safeguard those gains.” At the same time the DSC made a call for Afghan women to have a “meaningful role” in any future peace negotiations.

On the second day of the DSC, the Turkish MP Utku Cakirozer presented a draft report on “NATO Exercises – Evolution and Lessons Learned”. After the adoption of this report, Keir Giles, Research Director of the Conflict Studies Research Centre took the floor for a discussion on “Russia is back! (where it started)”. For Keir Giles, dialogue with Russia is crucial, but it needs to have an aim. It may not simply be a reward towards Russia. However, he believed NATO is addressing the military threats of Russia but that there is a deficit of action from the EU in the non-military domain.

On his turn Sir Nicholas Soames (UK) presented a draft report on “Evolving Security in the North Atlantic”. During the cold war NATO allies invested in significant assets in the GIUK (Greenland, Iceland, UK) gap. Meanwhile allies retired, withdrew or decommissioned these assets. Due to Russia’s increasingly aggressive international behaviour, allies must reconsider their position in the GIUK gap he emphasised. In support of the report, Commodore Marcel Hallé, DCOS Plans of the Allied Maritime Command Northwood took the floor to highlight NATO’s efforts but also the remaining challenges. Hallé agreed that recent and ongoing steps by NATO allies to develop a more robust maritime command structure as well as acquiring stronger capabilities and holding more seaborne exercises were strengthening the Alliance position. “NATO has seized on the problem and is looking to rapidly close the gap from where we once were, putting the Alliance on course to ensure we are able to meet current and future military challenges” he reacted.

Closing the DSC, Senator the Hon David Fawcett gave an overview on the Australian defence forces and highlighted their investments to make sure to remain an important (external) player. Of course, EUROMIL used the opportunity to have a private talk with the Senator to check about defence forces personnel in Australia. We learned that civilian employees are represented by the public sector department of the Australian trade unions. Military personnel however cannot join these unions. However, the Australia Defence Association (ADA) and the Defence Welfare Associations (DFWA) cover a part of the promotion and defence of working and social conditions. However, both associations make very clear that they should not be seen as “representatives of military personnel”.

Looking at EUROMIL’s agenda for the next weeks, we should also mention a presentation in the Science and Technology Committee on Sunday. General (Ret.) Tom Middendorp, Chairman, International Military Committee on Climate and Security (IMCCS) and Senior Associate Fellow, Clingendael Institute, The Hague, delivered a presentation on Climate Change and Security. “I am not an activist” Middendorp said, “I am a military expert who is used to facing problems directly rather than shying away. We are facing one of the biggest challenges of the century: climate change.” “Practically all security risks that the world population is confronted with, are climate related” he argued.

MP Madeleine Moon (UK), President of the NATO PA, opened the plenary sitting. In her speech she could not avoid tackling the Turkey-Syria conflict. She pleaded for activating article 4 of the North Atlantic Treaty (“The Parties will consult together whenever, in the opinion of any of them, the territorial integrity, political independence or security of any of the Parties is threatened.”) and convening NATO councils for consultation. “We need to promote dialogue because it is the only way towards a solution,” she said.

Second speaker was Rt Hon. Ben Wallace, Secretary of State for Defence of the UK. On the post-Brexit period he said, “Brexit or not: security is not a competition, it is a partnership.” On the Turkish-Syrian conflict the State Secretary answered that talks should continue and that he would not express himself on internal Turkish politics.

As final speaker, NATO’s Secretary General Jens Stoltenberg, addressed the Parliamentary Assembly. Beside looking back to 70 years NATO and highlighting the need to look forward, he addressed other challenges such as, Afghanistan, Russia and new technologies that will change the Alliance and the nature of warfare. On the latter NATO will play a key role coordinating in these new domains the work between member countries. Finally, also the Secretary General could not avoid addressing the Turkish-Syrian conflict as most parliamentarians did so during the Q&A. “In Istanbul I expressed my deep concerns on the situation, the tensions and the human suffering. Our gains should not be put in jeopardy,” Stoltenberg said. Briefly on climate change, one among the many other questions, the Secretary General said that this has security consequences and “will influence the way we plan and conduct military operations”.

Please allow us to make one final comment in the margins of this 65th Annual Session of the NATO Parliamentary Assembly. Never we have noticed such an active collaboration and networking from the (new) delegation of the European Parliament at the NATO PA. Let’s hope that this parliamentary EU-NATO cooperation will continue and, on its turn, positively influence the cooperation between national parliamentarians dealing with the broad issue of security and defence.