You are here:Home » Euromil News » 119th EUROMIL Presidium in Bucharest 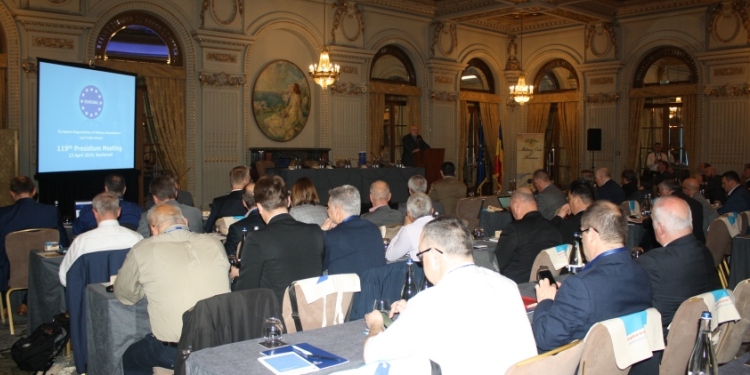 President E. Jacob officially opened the 119th Presidium Meeting and welcomed the delegates in Bucharest. He underlined that although this was not the first official visit of EUROMIL to Romania, this was the first time that a Presidium Meeting is held in Bucharest. The President then continued by looking at various anniversaries being celebrated at the moment: 70 years of the Universal Declaration on Human Rights in 2018 and in 2019, 70 years of NATO and 20 years of CSDP and he reflected EUROMIL’s contribution to these celebrations. He emphasized the importance of a human and social dimension, unfortunately, still missing in the maybe most important European security and defence initiative of the past years, namely PESCO. E. Jacob also ensured participants, that “at EUROMIL, we no not give up easily”, and will thus continue to advocate for human rights, fundamental freedoms as well as professional interest of military personnel. The President closed his speech by asking for a minute of silence for in remembrance of all those, military and civilian, who lost their lives in the execution of their tasks or became the victim of a terrorist attack somewhere in the world.

A. Constantin, President of the Military Order of Romania (MOR), welcomed the participants in Bucharest. He emphasized that MOR is a foundation and not an association, which is why it is contemplating to retire from EUROMIL at the end of 2019, especially now that the Romanian association LMP was accepted as an observer at EUROMIL in October 2018. He thanked everyone present for the past 11 years in which MOR enjoyed being part of EUROMIL.

Major General Teodor Incicas, Deputy Chief of Defence Staff, addressed the Presidium with a keynote speech. He emphasized that EUROMIL’s issues which had been highlighted by the President in his speech are close to his heart, and important for the Romanian Chief of Staff. He went on to explain that today’s security environment is increasingly complex and fluid and needs to be addressed by the EU with its unique mix of soft and hard power. While implementing new projects such as PESCO and the European defence action plan, Europe should not loose sight of one of its most important values, namely cohesion. Here, he also referred to the Romanian Council Presidency motto. He also stressed that while action of EU level is important, it is equally important for Romania to ensure that there is no duplication of NATO efforts. He concluded his intervention by pointing out that military personnel are the most precious assets of modern armed forces. Successful recruitment and retention as well as continued training and education are thus imperative.

The President thanked the Major General for his speech and emphasized that he clearly sees a need to cooperate more – different stakeholders working on the same issues, such as for example recruitment and retention, should work together in order not to duplicate efforts, learn from each other and implement effective solutions. E. Jacob also emphasized EUROMIL’s willingness to share experiences and best practices whenever needed.

The President explained that the Minister of Defence of Romania promised his presence to deliver a keynote speech, but finally was unable to attend the meeting.

A TV coverage of the official opening and interviews with President Jacob and President Constantin are available here.

The President opened the panel discussion by pointing out that EUROMIL initially invited representatives of the five biggest political parties currently represented in the European Parliament (EPP, S&D, ALDE, Greens, ECR) but unfortunately received limited responses. The panel thus needed to be slightly adapted, now featuring representatives of the EPP and S&D as well as a EUROMIL Board member.

R. Magdin, Vice-President of Strategikon, and moderator of the debate explained that especially because the armed forces are an important part of everyone’s national identities, debates like this are of utmost importance.

C. Preda, MEP (EPP, Romania), stated that the EPP was and still is an important driver behind EU defence integration. In the view of today’s changing security environment, the EU’s response should be collective, coordinated and coherent. In this view, it is also important to ensure that military personnel serving under the same flag is subjected to the same rights and obligations.

V. Negrescu, Founder of EM Romania and S&D candidate for the upcoming European elections, reflected on the broader picture and stated that the upcoming European elections really are about the future of Europe. The EU needs concrete policies which bring citizens closer to the European project, while acknowledging that the most important European achievement is peace. Peace, he went on, is also secured by military personnel. He concluded by saying that lots of the positions EUROMIL defends appeal to him and that, if elected, he will do his best to push them at the European level.

During the Q&A session, great power competition, as well as closer cooperation between national MPs and MEPs and the missing link between citizens (in uniform) of the European member states and the European project were discussed. Furthermore, delegates insisted on the need for association to engage in politics, not in a party-political way, but by means of focusing on essential human and labour rights.

A. Lima Coelho concluded the panel with an encouraging call to vote. He explained which concrete recommendations EUROMIL prepared in the view of the upcoming elections: EUROMIL supports a comprehensive and indivisible approach to security and defence, recognizing the important role military personnel plays all over Europe and in missions abroad. He called on all delegates and guests to inform themselves about parties and candidates and make an informed choice as “voting is essential”.

The moderator suggested that EUROMIL’s recommendation deserve greater attention and a proper debate, which could, for example be created through a campaign which engages citizens and MEPs at the same time, creates a sense of urgency and includes a narrative.

D. Eugen, a representative of the Ombudsman of Romania, took the floor, and explained that in Romania, due to the law of the military status, military personnel may not join political parties. In general, the ombudsman can watch and if necessary, defend the human rights of military personnel and their relatives. The ombudsman also reports about his findings, the latest special report was presented at the Romanian parliament in December 2018.

In the afternoon, delegates discussed internal reports. Recurring themes in the national reports delivered by the members and observers where salaries and recruitment and retention problems. The Presidium approved the position paper on recruitment and retention. It also took note of the termination of the observer status of the Greek association PFAFU and the suspension of the Lithuanian association KTGC. EUROMIL counts now 33 member associations from 22 countries.

The next Presidium Meeting will be held in October 2019 in Brussels, Belgium.

EUROMIL Position on Recruitment and Retention