You are here:Home » Euromil News » 118th EUROMIL Presidium in Budapest 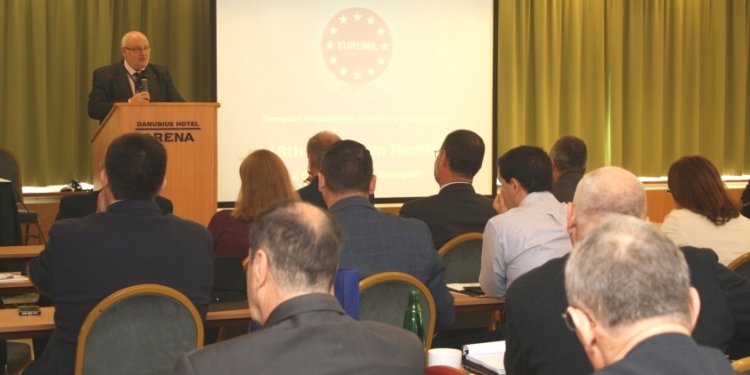 The President opened the 118th Presidium Meeting in Hungary, pointing out that being back in Hungary, with the excellent support of HOSZ, is a pleasure for EUROMIL. He emphasized the importance of human rights and fundamental freedoms in the work of EUROMIL and officially launched a video which EUROMIL produced on the occasion of the 70th Anniversary of the Universal Declaration of Human Rights. The video on the 70th Anniversary is available online, the opening speech of the President is available on youtube.

As the President of HOSZ, János Czövek took the floor, emphasizing that is the 5th time the EUROMIL Presidium meets in Budapest, which is a testament to the good cooperation between EUROMIL and HOSZ. He wished the delegates a successful meeting.

The Minister of Defence, Mr. Tibor Benkö, took the floor and welcomed the delegates in Hungary. He emphasized that reconciliation has a long history in the Hungarian armed forces, as the view is widely held that the armed forces cannot be separated from society but rather have to be viewed in their social and economic context. As a Minister, it is important for him to consult with the military trade union, to benefit from their knowledge and expertise. An exchange of views and best practices is also essential on a European and international level, as the example of EUROMIL shows. The Minister went on to explain that in a rapidly changing security environment, the only right answer can be well-trained, dedicated and well-equipped armed forces personnel. In this respect, he mentioned recruitment and retention of personnel as an imminent challenge. As all European armed forces are facing similar challenges, the meeting will provide a good framework to discuss and exchange best practices of military associations and trade unions.

The official opening was followed by a panel discussion on “New challenges for European armed forces”. The moderator, Marcell Hajdók (HOSZ), opened the debate and stated that some challenges faced by European states cannot be dealt with by one nation alone – migration and climate change are such challenges. To deal with new challenges however, defence forces might need new equipment, new training, more resources etc. The introduction is available on youtube.

As the first speaker, Alexander Verbeek (Institute for Planetary Security) focused on the climate change – security nexus. He mentioned, that in hindsight, it is always easier to identify root causes and trends. Looking at our security environment today, one can however identify climate change as a so called “threat multiplier”. Not only demographic changes and population growth, but also increasing consumption, the continued warming of the earth as well as shrinking fresh water resources are a destabilizing factor which will unfortunately hit the more fragile regions of the world harder than Europe. Europe however will have to deal with the consequences, such as increased migration flows. The speech is available on youtube.

László Domján (Head of Department for Defence Policy, Hungarian MoD) started out from the geopolitical shifts one can observe in the European neighbourhood these days. Emerging powers, the Arab spring, the Russian annexation of the Crimea, terrorism and migration are only the headlines of these profound changes. With an increased instability and unpredictability, the military must assume a greater role and responsibility, the spectrum of military tasks will become broader. Consequently, soldiers must be prepared and capable to fulfil a wide range of tasks, leaders need to be more creative and open for innovation, after all, we are living through a time of doctrinal changes. To manage the transition successfully, a whole of government approach is needed.

Peter Vojtek (Vice-President of ZVSR) agreed with the other speakers with regards to the changed nature of the European security environment. He emphasized that even though Europe is ranked as the most peaceful region in the global peace index, challenges for European military personnel will remain. To master these challenges, military personnel must be properly trained, skills need to be improved – as after all, the “army is only as strong as its soldiers”. The speech is available on youtube.

In the Q&A session, it was emphasized that climate change affects all of us and immediate action is required. Migration as a security issue was discussed by the participants, as well as the need to strengthen the resilience of the most affected states.

The next Presidium Meeting will be held in April 2019 in Bucharest, Romania.

EUROMIL Releases Recommendations in View of the European Elections