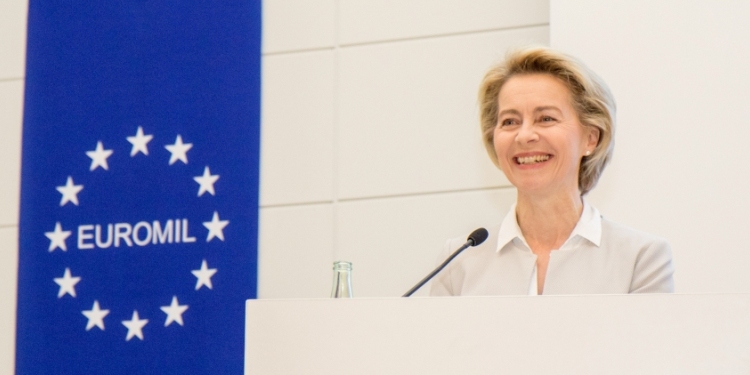 The Presidium Meeting was preceded by a reception, kindly hosted by the DBwV in cooperation with EUROMIL.

The morning session of the Presidium Meeting on 21 April 2017 was open to the public. The President of EUROMIL, E. Jacob, stressed the need for closer defence cooperation at European level and emphasised the importance of the social dimension of security. In this context, he mentioned the work recently achieved by EUROMIL in this field. Furthermore, President Jacob highlighted the concept of “Citizens in Uniform” and insisted that soldiers have a role to play in democracy. “While armed forces must, of course, be democratically accountable, soldiers should also be fully integrated in the civilian social order” he said.

The Chairman of DBwV, A. Wüstner, underlined the current security context in Europe. Moreover, he denounced populism and nationalist feelings and called for greater unity, closer military cooperation and integration at European level. He continued emphasising that military personnel, deployed to prevent conflict and maintain or restore peace, deserve the best conditions to fulfil their service. Governments and society have a “duty of care” towards them and enough investments are needed. Modern military missions can only be successful if they are carried out by highly motivated, equipped and well trained soldiers. A. Wüstner then turned to the role of EUROMIL in raising the voice of soldiers and supporting the social dimension of security. He underlined that social standards for European military personnel must be adopted upwards. Finally, the Chairman of DBwV concluded by referring to the “Armed Forces Covenant” of the United Kingdom, which highlights the important link armed forces have with society and could serve as a basis for discussing the concept of European “Citizens in Uniform” as well as the kind of army Europe wants – should a European Army be desirable in the long run.

The German Minister of Defence, U. von der Leyen, congratulated EUROMIL for its 45th anniversary and underlined her strong European feeling. She focused on three important topics, firstly the importance of the European Union (EU), secondly the need for more Europe in security and defence and thirdly burden-sharing. The EU is indeed much better and more capable than people think. In times of fear and terror, we should focus on what we created, namely a unique and peaceful area. Nothing is for granted and the core principles and values of the EU should be recalled, the Minister stressed. In the field of security and defence, European solidarity is needed as well. Europeans should think strategically together and keep a strong transatlantic bond: EU and NATO are complementary. The Minister explained that EU civilian and military missions are deployed with a unique strength, with a comprehensive approach involving not only diplomacy and security but also development actors. Civilian and military components should be further integrated and the EU is currently working on this. Use should be made of the Lisbon Treaty and, in this sense, PESCO needs to be launched. The Minister said that the idea of an EU army could be a long-term objective but smaller scale cooperation efforts are needed in the short term. Besides, Europeans should take a fair share of the burden and invest more in security and defence. More spending is also needed because military personnel need to be well equipped. Finally, the Minister highlighted that it is crucial for the armed forces to be a modern and attractive employer, which encompasses that military personnel have a say in the above-mentioned projects. Talking about the Chairman of the German association, von der Leyen said “Wüstner is my ears in the troops, we fight together”. Policy-makers should thus listen to the concerns of military associations.

The President thanked the two speakers and asked the Minister to tell her European colleagues she met with delegates of military associations, something uncommon in most European countries.

Following the opening speeches, a panel discussion on “complaint mechanisms in EU-led missions” took place. Hans-Peter Bartels, Parliamentary Commissioner for the German Armed Forces, delivered a speech to kick off the discussion. He presented his mandate and underlined the fact that soldiers have the same rights as any other citizen in Germany. He called for closer defence cooperation of armed forces in Europe and further collaborative measures such as the Dutch-German cooperation. In this regard, he stressed the joint visit of the Dutch and German military ombudsmen to the mission UN MINUSMA in Mali last year, which he called the start of international parliamentary oversight.

The subsequent discussion was moderated by Hans Born, Assistant Director and Head of Policy and Research Division, DCAF, who, among others, noted the great variety of mandates and tasks of ombuds institutions and underlined the important role of the International Conference of Ombuds Institutions in the Armed Forces (ICOAF) which will meet in London in October this year. He explained that the discussion aimed at exchanging information on the issue of complaint mechanisms in EU-led missions. Should national ombuds institutions be pushed to work together? Should a EU complaint mechanism for CSDP missions be adopted? Should the competencies of the EU Ombudsman be strengthened?

Lt Gen van Griensven, Inspector General of the Royal Netherlands Armed Forces, presented his function and explained that international cooperation not only applies to missions but also to day to day work in the units, as for instance in Münster, where Dutch and German soldiers work together. Van Griensven highlighted that the type of complaints ombuds institutions deal with concerns behaviour. If something happens, it should thus be solved in place, at the lowest level, in hierarchy, through the national procedure and not in Brussels or elsewhere. Nevertheless, in case something happens, it is important to know whom to address. It might thus be useful to meet with local ombuds institutions before missions.

Finally, Mr. Sohst, representative, DBwV, insisted that whatever their national situation is, soldiers should be able to complain and thus mechanisms exist. Issues should be solved in place, in unit, with the team. He briefly explained the German system and the important role of the parliamentary commissioner for the armed forces as well as of the military association in guaranteeing that the rights and interests of soldiers are protected. Mr. Sohst concluded that a EU Ombudsman for the armed forces is not desirable as long as no EU army exists. However, more national ombudsmen for the armed forces are needed, especially in countries where nothing is arranged yet.

In the subsequent Q&A session, participants agreed that establishing complaint mechanisms is a matter of transparency and accountability and that it is sometimes difficult to work with national structures. Common rules, practices and institutions might therefore be needed.

In the second workshop, the issue of short term careers for military personnel was discussed. Benjamin Schultz (Adviser, Personnel Department, German Ministry of Defence) explained the system of the vocational advancement service in Germany.

After the workshop session, delegates had the chance to convene in regional groups to discuss issues of common concern.

At the second day of the Presidium Meeting, it accepted the application of the Independent Trade Union of Defence (NSO) from F.Y.R.O.M. as an observer. EUROMIL counts now 34 member associations from 22 countries.

The next Presidium Meeting will be held in October 2017 in Riga, Latvia.