You are here:Home » Euromil News » Protecting Without Being Protected – Basic EU Social Standards Not Applied To Security Personnel In The EU 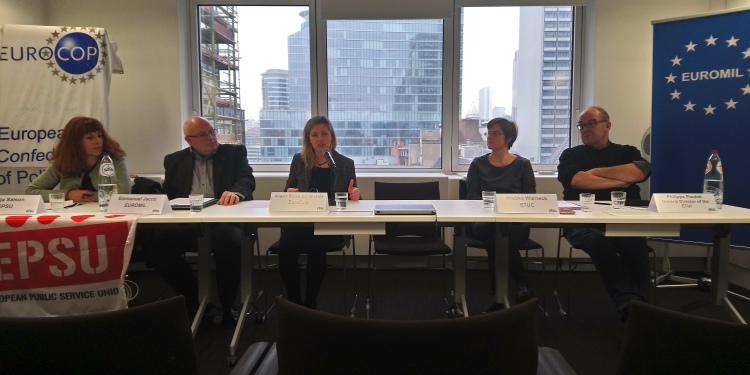 In recent years, the EU has frequently made use of the provisions in Article 153 of the TFEU to set minimum standards on working and employment conditions of workers in the EU. Although the European Commission consistently tries to define “workers” as broadly as possible to include all workers, the Council has often sought to exclude civil servants or public administrations, police and military personnel from the scope of EU social directives, and recently also emergency services from the scope of the proposed directive on Transparency and Predictability of Working Conditions (TPWC).

This exclusion was at the center of the lunch debate held on 25 January at the ETUI in cooperation with ETUC, EUROMIL, EuroCOP and EPSU. Wiebke Warneck, Senior Legal Advisor of the ETUC underlined in her exposé that, for the ETUC, it is unacceptable to create second class workers by exempting them from the TPWC Directive, and this concern has been taken to trilogue.

Àngels Bosch Campreciós, President of EuroCOP, the umbrella organisation of police officers in Europe, said that the recently proposed TPWC Directive leaves police officers with no right to be trained even though training is crucial for them to be able to protect the citizens as well as themselves. Predictability of their working time is also left unregulated, but it should be clear that a normal working schedule is not the same as an emergency situation. With regard to health & safety it is difficult to understand why, in certain EU member states, police officers have more protection than in others, for example bullet proof vests. Does this mean that the life of a police officer is more valuable in Belgium or Sweden than in Greece? While it is left to the member states to monitor that, nothing will change, she concluded.

Emmanuel Jacob, President of EUROMIL, the umbrella organisation of European military trade unions and professional associations, agreed that it is the right moment to have this discussion. “The right of association is fundamental for us, there is no social dialogue when there are no associational rights”, he said. Even if, according to the European Commission, military personnel are not excluded from a directive, many countries do not implement it or implement it only partially. This is the case when, for example, a local commander gets to decide on the implementation of the Working Time Directive. Even when deployed, military personnel should be able to discuss living and working conditions and have a right of information. This is possible in some countries and it does not mean the end of military and police service, as some believe.

Nadja Salson from EPSU reiterated that equal treatment of workers is guaranteed by the EU Charter of Fundamental Human Rights as well as the European Convention of Human Rights that prevents blanket exemptions. “By granting trade union rights you contribute to the democratization of the society”, she said, and added that, especially in the current situation of authoritarian drifts in some EU Member States, it is even more important that fundamental rights apply in all workplaces. It makes no sense to exclude military personnel, who are citizens in uniform, from EU social standards and trade union rights while the share of troops deployment is 2.5%. The Council’s proposed exemption for emergency services from the TPWC directive is unprecedented and very unsettling as it would cover large numbers of workers – the armed and police forces, but also health care workers, gas and electricity engineers, border guards, migration officers etc.  Last year, the EU governments signed the revised ILO guidelines for emergency staff which list a number of challenges such as low pay, long hours, and weak protection. The Guidelines call for better training of the workforce in new technologies, facilitating international cooperation and improving social dialogue etc., the opposite of what is currently proposed by the Council.

The big question is, what can be done? “The national level is the biggest problem”, according to Emmanuel Jacob. “In the past 20 years there was more and more willingness to include specific groups in the Directives but even, if military personnel are not excluded, member states find a way to say that something is special”. Nadja Salson added that we need to find out whose idea it was in the Council to exclude emergency personnel, because it is important to know where this comes from. And she added that “civil servants are not any more protected. They have been brought to the level of the private sector but without the same EU rights.”

Salaries and Payments of Military Personnel in Spain