You are here:Home » Members news » Congress of Spanish Soldiers in Madrid 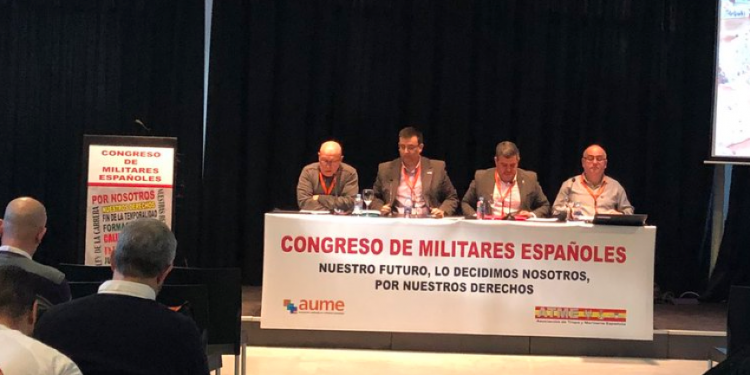 On 24th February, a Congress of Spanish Soldiers, organized by professional associations of AUME and ATME, was held in Madrid. Exercising the right of assembly recognized in the Spanish Constitution to all citizens, it has been a democratic event open to all soldiers regardless of their status of members of the convening associations.

The Congress has served to discuss the problems currently afflicting the military in Spain related to professional, economic and social conditions and to expose possible solutions. The situation of the temporary military when they reach 45 aged, the development of the professional career and the exercise of fundamental rights. Among other issues, the Congress has approved resolutions regarding the application of a comprehensive law for all the military regardless of their rank, the improvement of salaries after more than a decade of loss of purchasing power or the suppression of military jurisdiction to join the ordinary courts.

In addition, the Congress has shown its support for the Resolution of the parliamentary opposition have proposed last week the suspension of the law regarding the contract termination of soldiers who have reached 45 aged until the work of the subcommittee in Parliament currently underway is completed.

The attendance was massive and the capacity of the room was completed. The closing ceremony of the Congress counted the representation of the four parliamentary groups: governmental PP, and opposition PSOE, PODEMOS, CIUDADANOS. Representation of the two major trade unions -CCOO and UGT- were present. Other significant organizations such as the professional association of judges (left-wing progressives) JUECES PARA LA DEMOCRACIA or the social organization MOVIMIENTO CONTRA LA INTOLERANCIA (Movement Against Intolerance). And, of course, the union of the POLICIA NACIONAL (SUP) and the professional association of  GUARDIA CIVIL (AUGC).

The Minister of Defence and other ministry authorities declined the invitation. However, it should be noted that, on the other hand, two members of the Observatory of Military Life, an organization dependent on Parliament, were present.

The four political representatives plus the unions UGT and CCOO took the floor, as well as the general secretary of AUME (Iñaki Unibaso) and the president of ATME (Juan Carlos Tamame) and the final speech of the member of the Board António Lima Coelho as representative of EUROMIL.